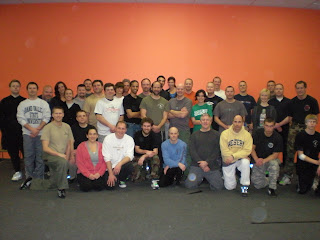 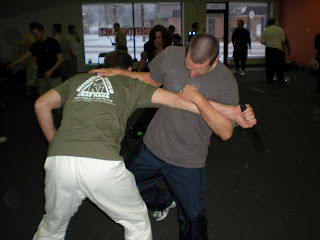 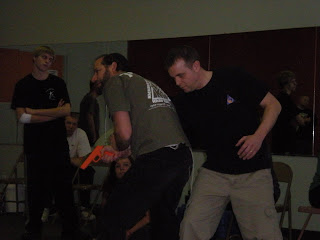 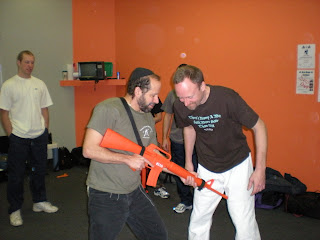 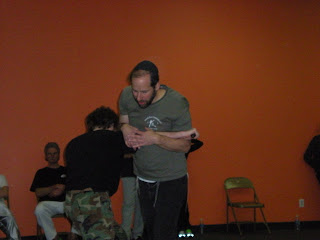 On Saturday, Feb. 21st we brought in Krav Maga instructor Moshe Katz from Israel to share some authentic Krav Maga with us. Moshe is Itay Gil's (star of the History Channel's Human Weapon Krav Maga episode) highest ranking student. Moshe stayed with me at my condo for a few days. Living in Israel just outside of Jerusalem Moshe shared stories of a vastly different cultural and life perspective than I hold. He has a gentle heart and was a true gentleman to me and all who he came in contact with here in Grand Rapids.
Students at Ronin Martial Arts Academy as well as over 50 others from all over Michigan thoroughly enjoyed Moshe's seminar. Much to my surprise and pleasure we sold out in a little over one week.
At the seminar we learned numerous defenses dealing with everything from knife, gun and empty hand threats to 3rd party and airline situations. Moshe also shared with us the philosophy, history and roots of Krav Maga in Israel.
I had the honor to train one on one, hang out, play guitar together with Moshe (Moshe you do rock! I especially liked our "All Along the Watchtower" rendition!). It seemed that we talked about everything under the sun (probably because I am always asking questions). He was a pleasure to have as a guest, so much so when the chance came to have him back March 19th I jumped at the chance. Apparently others here share my sentiment because after only one day marketing for the seminar we have over 18 spots pre-paid for the seminar. I anticipate that we will have well over 20 spots full by the end of this weekend.
I like Krav because of its simplicity, effectiveness and modern adaptation. It is used here and now, not somewhere, sometime. It is practical and very functional. It is about simplicity.
I am happy that people here have embraced Krav Maga and hope that it empowers & enriches each persons life who trains in it.
I am proud to be an Israeli Krav International Certified Instructor and will continue to bring Moshe in to share deeper Krav Maga insights with us.
(In the words of Jack...)
Keep going!
~Craig

A Good Night for a Walk

It has been a beautiful day today and the night proved to be equally wonderful. 56 degrees, clear, starry night. A little earlier a close buddy of mine came over and we decided to go for a walk. We talked about life's beauty, challenges, hopes, dreams, paradox, you know the things two people talk about when they are "mowing the lawn" mentally. It was a good night and great philosophical conversation. We had been walking a hour and a half or so and were about a half mile from my condo (I live downtown in a mid sized city where the "landscape" changes rather quickly if you know what I mean!) when I say "hey, lets cross the street." It just felt like the right thing to do. So we crossed. We take no more than a couple steps onto the sidewalk on the other side of the street and these four rather drunk "gentlemen" turn the corner on the side of the street we just came from. They were loud obnoxious and clearly looking for trouble. But since we were on the other side of the street we were of little interest to them. Now, I don't know why exactly I felt like crossing the street, it just happened very naturally... but I did cross which resulted in a possible situation being resolved before it ever became one! My buddy and I looked at each other smiled and with a slight nod continued our conversation.

A moment of Silence for Helio Gracie who passed away this past Thursday.

Helio Gracie, the father of Gracie jiu-jitsu, is dead at the age of 95. Gracie passed in his sleep early Thursday in Itaipaiva, Rio de Janeiro, after he had been admitted to a local hospital a few days prior for stomach problems. “He passed the way he always wanted to –- quick and fast,” said an immediate relative, who asked not to be identified. The relative said Gracie’s body would be buried on Thursday. The youngest of Cesalina and Gastao Gracie’s eight children, he learned traditional jiu-jitsu by watching his brother, Carlos, teach it, but his small frame made it difficult for him to execute the moves. As a result, he adapted techniques to fit his limited physical ability and gave rise to modern-day Brazilian jiu-jitsu. Gracie was involved in two legendary fights. He lost to Masahiko Kimura -- a man who outweighed him by some 40 pounds -- in 1951 when Carlos threw in the towel after Kimura broke Gracie’s arm with the shoulder lock that now bears his name. Four years later, Gracie fought former student Valdemar Santana for nearly four hours before losing. His impact on the sport of mixed martial arts was profound. His son, Rorion, was credited with developing the concept that became the Ultimate Fighting Championship, and another of his sons, Royce, won the first two UFC tournaments in 1993 and 1994. Two other sons, Rickson and Royler, also competed in MMA. Gracie is survived by his wife Vera; his sons Rickson, Royler, Rolker, Royce, Relson, Robin and Rorion; his daughters Rerika and Ricci, as well as numerous siblings, nieces, nephews, and grandchildren.
Posted by Craig Gray at 7:24 PM No comments: