Showing posts from January, 2010
Show all

Who is Responsible for Your Training? 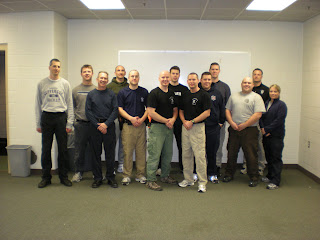 Pic is from a recent MCOLES approved training I conducted with a group of officers from police departments throughout West Michigan. The other day I was having a conversation with another instructor regarding his disappointment with his students performance at their pre -test. He was beating himself up feeling that he had somehow short changed his students. He felt that their poor performance was his fault. He thought that maybe he wasn't going hard enough on them or maybe he did something that didn't motivate them to perform better. Now, I know this instructor well enough to have a good idea how much he is dedicated to his students success. Now don't get me wrong I have had my fair share of instructors that either didn't care, were inept or were just plain horrible teachers. Let me tell you this instructor is none of these. I have a good idea that he is a great instructor and bends over backwards to try to give each of his students access to as much information and
3 comments
Read more
More posts