Showing posts from March, 2011
Show all

Zen and the Art of Krav Maga 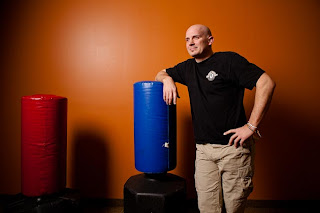 We recently made the front cover of Rapid Growth Media. A nice article that you can read here: http://www.rapidgrowthmedia.com/features/03242011KravMaga.aspx The article has created a little ripple of a buzz inspiring some others to do a little writing of their own. Here is a nice write up by John Kowalski's Babacita blog shout! Thanks for the good words John! Here are John's words: An excellent article on Krav Maga and local Grand Rapids, MI instructor Craig Gray. I’ve had the honor and privilege of knowing Craig as a friend and also training with him for a few years. He is the utmost professional and extremely skilled in teaching this important, life-changing mentality and skill set. Some excerpts from the article: “Our global society has changed the way we do warfare. It’s not ‘us versus them’ anymore. You don’t always know who the enemy is,” explains Gray. “Krav continues to change to embrace new threats.” No matter the situation, Gray believes
Post a Comment
Read more

A chill ran up my spine when I first heard the news regarding the terrorist bombing a bus in Israel, especially upon the news report of the particular bus that was said to have been hit: Bus #174 to Maaleh Adumim. It is the bus I take when I am training in Israel with Israeli Krav International Head Instructor, Moshe Katz. My first thought was, is Moshe alright?! Once I found out that he was, my next thought was, "Hey, that is the bus that I take. It could have been me on that bus!" Reality check and some food for thought! Another Krav Lesson. Later reports confirmed that it was NOT bus #174, rather it was bus #74, regardless a tragic event all the same.   Here is an article Moshe wrote regarding the recent terrorist bombing in Israel. I just landed yesterday, back home in Israel after a long seminar tour of the USA and Canada, and it is great to be home. Today I received some phone calls from dear friends and family, "Are you OK?", "Sure", I s
1 comment
Read more

The Masks We Wear 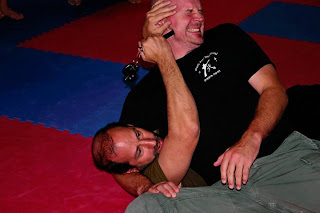 Moshe (bottom) & I showing some Krav Maga ground tactics at a seminar in Indy (ouch!) . Here is a blog post by Moshe Katz. I liked what he says here and thought you would find it insightful as well. THE MASKS WE WEAR by Moshe Katz We all wear many masks throughout our lives. We are trained not to act spontaneously, not to show our hand, not to reveal too much. A child cries when it feels like it, even if the timing and location are very poor. Tomorrow I will fly to the USA, a twelve hour flight, and I pray I will not be near any crying children on the plane. As a child grows older his parents train him how to behave in public, and this is a good thing. We must learn to be considerate of others, not to shout out loud in public when we are overly excited about something. We live in a civilized society and we must be constantly aware of our behavior and be considerate of others. But then there are moments when a person might lose control. He might forget all hi
Post a Comment
Read more
More posts