Showing posts from May, 2016
Show all

The Chick Being Born by Mark Nepo

"Every Crack is Also an Opening." When in the midst of great change, it is helpful to remember how a chick is born. From the view of the chick, it is a terrifying struggle. Confined and curled in a dark shell, half-formed, the chick eats all of its food and stretches to the contours of its shell. It begins to feel hungry and cramped. Eventually, the chick begins to starve and feels suffocated by the ever-shrinking space of its world. Finally, its own growth begins to crack the shell, and the world as the chick knows it is coming to an end. Its sky is falling. As the chick wriggles through the cracks, it begins to eat its shell. In that moment - growing but fragile, starving and cramped, its world breaking - the chick must feel like it is dying. Yet once everything it has relied on falls away, the chick is born. It doesn't die, but falls into the world. The lesson is profound. Transformation always involves the falling away of things we have relied
1 comment
Read more

Identity: The Choice of What to Be & See 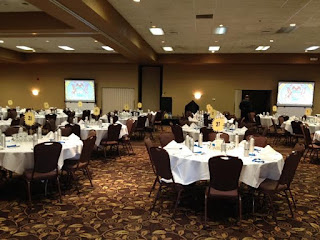 The Calm Before the Storm at the 2016 Michigan Dept. of Corrections Annual Conference Who will you choose to be?  What will you choose to see?   These are the questions that I asked the directors, wardens and other leaders at the 2016 Michigan Department of Corrections Annual Conference. Will we choose the path of being an Ethical Protector ? Are we clear on where our "Moral Compass" points? Can we see the Life Value inside of each person we meet, beyond their behaviors, relative beliefs and values? We are all protectors, we just have to make sure we are protecting the right things! ISIS, drug dealers and other criminals are protecting something too. It's just the wrong things!  The picture at the top of this page is of the empty conference room before everyone arrived earlier today. There where just under 300 leaders from the Michigan Dept. of Corrections met from all over the upper and lower peninsula of the state. They get together every year at this
3 comments
Read more

Mojo Risin' - for most it's a passage from the 1971 Door's song, L.A. Woman, but to me and my friends it was also a legendary motorcycle spot that was talked about in whispers by our older brethren when we were kids. You could see the sand, hills and trails of this dirt biking Valhalla from US131 before urban sprawl enveloped it more than 20 years ago. Surfers had their illusive ultimate wave that  they spent their life chasing. Skateboarders of old had the perfect pool. Ski and snowboard aficionado's have their perfect slope or powder. Jerry, Mark, and I had what we knew as "Mojos." The perfect dirt bike riding spot. A place where the days lasted forever, your ride was epic, legends were made, everything was... well... perfect.  The reality of this "perfect" spot was a far cry from all the hype. However, many kept the illusion of this perfect place vivid in their minds. As if this would be the be all, end all of  their
Post a Comment
Read more