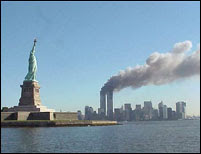 I wanted to wish everyone a happy 4th of July.

I began writing my blog for the 4th when Moshe e-mailed me this article. I thought that it was written very well and said everything I was trying to convey, so being one for efficency I thought I would share his words. I ran it by Moshe to make sure it was alright with him and indeed it was, so here you go!

Krav Maga for me is more than a 'martial art', or even a method of self defense. It is part of my essence; it is part of who I am.

I am an American citizen and an Israeli citizen, and I am proud of both traditions and I am loyal to both flags. I signed up for the US draft, although I was never called, I vote in every election, I support our troops.


The United States and Israel share the same core values, values which are not shared by many other countries. At the outset the USA was an experiment in democracy. Kids often ask me, "Why should I study history? What's the big deal?"

Well, you must study history. Without the knowledge of history you will never understand the present. When you study early American history; the founding fathers, their struggles, their passion and sacrifice, their goals and uncompromising attitude, you will understand what America is about, or what it was about and should be about.

At the time of the founding of the United States of America, the personal freedom which we see today in America and in many parts of Europe was unheard of. Most people today could not even imagine that kind of life, a life without the freedom of personal choices, a life without the freedom of diversity or self expression. We are free to choose our life style and beliefs.

Early Americans struggled, fought and died, so that you today can have the life you have. We are still indebted to those early freedom fighters and we must never forget that we too must fight; we must always remember that freedom is never free. I can not understand how an American can not know the lives of Washington, Adams, Jefferson and Franklin. I do not know how an Israeli can not know the lives of Jabotinsky, Begin, Trumpeldor and Herzl.

Why do we train in Krav Maga? Because we want to be free. We train so that when a woman walks down the street she is empowered to stand up to sexual or verbal abuse, so that a child or teenager can feel strong enough to say 'No' to peer pressure, so that an older person can walk the streets without fear.

We train in Krav Maga to retain the basic freedoms that the USA and Israel stand for. The government, army and police protect us on one level; we must protect ourselves on another level. To live in fear is not to be free, we train to be free.

I see Krav Maga as an Israeli contribution to American life and to the lives of all those who value freedom. Give it as a gift to someone who needs to feel the confidence, the power. This is the spirit of freedom, the spirit of America, Israel and all people who stand up to tyranny.

I wish everyone a great 4th of July!!

All the Best,
~Craig