The Summer, the Wolf and the Wolf Pack 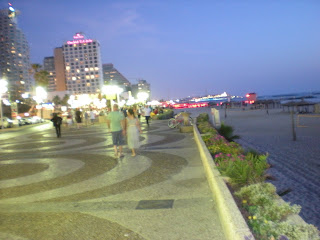 A beautiful night on the oceanfront in Tel Aviv, Isreal, 2010.

Hey gang! It has been a while since I've written. It's been a busy summer: Teaching seminars and running regular Krav Maga classes at Westside Fitness; collaboration with, developing and teaching new workshops with Jack Hoban and RGI; radio interview on WMOM 107.2 FM's morning show; our usual work with Frontlines of Freedom radio show; completed upcoming article in Alpena Fifty-Two Magazine; innovated new LIFE Leadership & LIFE Skills program with Relationship Violence Prevention Expert Anne Parpas; promoting and presenting various programs to numerous organizations nationally; coordinating upcoming Krav Maga program and Her Survival Guide seminar at East Hills Athletic Club & Rockford Community Education; and looking forward to starting back up school at the end of the month (History of Michigan & Early Western European History 400 B.C.E. through 1400).
~
I'm ready for the ramp up this fall, it is going to be an exciting autumn and winter!
~
Ok now for something useful:
~
I was taking a walk around the Heritage Hill /East Town area the other day when I saw some kids vandalizing a light post at the newly renovated houseman field. About the by the time I took notice I saw two other young men approaching (early 20's maybe) the young hooligans. These young guys hollered at the kids messing with the light post. As they approached the kids took off cursing at them as they left. I walked up to the area and began talking to the young men seeing if I could be of some help. We started talking about how the area has been turning around and that in order to keep that transition going they had to stay involved in keeping the area up and continuing to keep an eye out for Shannan's like what we just saw.
~
I applaud these guys for stepping up to the plate and taking action. We have to watch out for each other and our communities. Many people witness things like this (and worse) and never do anything about it. They turn the other way hoping someone else takes care of the problem. These people may be "Moral" (knowing right from wrong) but lack proper "Ethics" (doing what's right).
~
These young men were proud of there community and stood up for what they believed in. Using nothing more than their presence and voices to deter the offenders. Now they could have averted their path and just called the police who might have driven by after the damage was done or they could have just ignored the kids all together only to complain how the neighborhood is going down hill or how the police need to keep a tighter patrol on the area, but they didn't!
~
Jack Hoban and I were just talking about Morals vs. Ethics the other day when he was here. The reason that developing confidence and having skill is so important is that: 1) We are more likely to be able to discern a real threat from one that isn't real 2) Being a protector / defender is risky and requires more skill to feel more confident to choose to be ethical under pressure. We believe that by having physical skills it will help people to accomplish this. The best way we found is to teach with an integrated methodology. It is more effective to train physical, mental and ethical skills simultaneously for deepest impact and best result. The Ethic drives the tactic which then drives actual technique. The combination between mutually supported physical activity and discussions can be a very powerful tool to getting the message across more effectively.
~
Remember: We are all in this together, so we have to help one another out.
~
"The WOLF is only as strong as the PACK and the PACK is only as strong as the WOLF."
~
~
Keep going,
~Craig