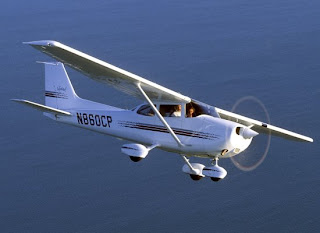 My knuckles were pure white as I pulled back on the yolk of the Cessna 150 airplane. All I could see was blue sky in front of me. My stomach was filled with both exhilaration and anxiety; kind of like being on a roller-coaster only I was the one driving this crazy thing and there was no guarantee that I would be rolling back into funland at the end of the ride!

The plane was pitched almost 90 degrees straight up from the ground. The emergency air whistle on the planes wings blew its eerie tone letting me and my flight instructor know that the craft was ready to stall out, loose it aerodynamic lift and drop like a rock back toward the earth!

Kris kept telling me to pull back more on the yolk, "she'll take more, keep pulling back." She told me that these Cessna's would pretty much fly themselves and besides she would take the controls if I froze or didn't know what to do during our simulated crash landing. I was both excited and terrified! What if I did freeze or did the wrong thing? Part of me knew that Kris would take care of it, but I was the acting pilot and I wanted to be able to pull out of this stall. I was more than nervous.

Just then a weightless feeling came over us, the plane lurched forward losing air speed, the whistle stopped its telltale screeching; I saw the wing come around as the aircraft didn't just stall out but went into a spin toward the ground! I could feel the blood drain from my face as I freaked for a split second until the drill Sargent in my head started barking at me to quite being a pussy (sorry, his words, not mine! =] ) get it together and f*ing start pulling out of this just like I was taught.


My technique was a bit ugly, but I managed to pull out alright. Although I think that Kris's slight pale complexion was a tip off that she was about as surprised as I was regarding the partial spin. She played it off well though as she pointed out what I did well and what I could use some work on. She went on to explain what caused the spin was that in my nervous state I must've been pushing on the rudder peddle with my foot making the tail come around.

Kris assured me again that the Cessna would fly itself even if I didn't do anything to recover from the stall. She said "If you have enough altitude the plane would right itself and naturally find its aerodynamic state and glide all by its self until it ran out of sky.

So we climbed to about 2800 feet in altitude and she told me that whenever I was ready induce the plane into a stall again and just let go of the controls.

I repeated back to her what she said. It was more of a question than a statement. "Just let go then?" I said.

And that is exactly what I did!

I took the plane up up up and when I heard that emergency whistle blow I pulled harder on the yolk until the plane slowed and then dropped. My stomach once again had that feeling of falling, my mind panicked for a split second telling me that I was crazy to just let go. What the F was I thinking? I was going to die! And then I just let go.

The plane did exactly as Kris said it would it first fell and then it righted itself and then it glided. As it was doing this I asked Kris what would happen if I still didn't touch the controls. She repeated what she had told me earlier. "It will just continue to glide until it loses air speed and lift. Then it will fall and then start the process over again until it "runs out of sky" and eventually crash."

We let the plane do repeat this cycle (all except the crashing part!) a couple more times to appease my curiosity and then as we began "running out of sky" so to speak, we gave the old 150 some throttle got to an acceptable altitude and took'er to the airport for a safe landing.

After that day my flying dramatically improved. With my increased confidence levels everything seemed to be less stressful and so much easier!


Damn I LOVED this I thought to myself!! I love testing myself & embracing my own fear.

That lesson in the skies over Grand Rapids once again confirmed many things for me. Being able to better identify a true emergency vs merely a challenge was invaluable; Sometimes our natural perception is counter intuitive regarding overcoming the challenge that is in front of us; Knowing and trusting our equipments limitations makes your trip not only more enjoyable, but safer for everyone; The value of good instruction and mentoring; and maybe the biggest lesson of them all: Having faith and knowing when to just let go!

For those of you reading this I ask you to please write in your comments about the lessons of this story.

For those who are curious how to pull a airplane out of a stall or spin here is a link on how to:


Happy new year folks! I hope that in the year to come you face your challenges with confidence, faith and the ability to let go!