Muskegon Middle Schoolers Get Some Tips on Conflict Resolution 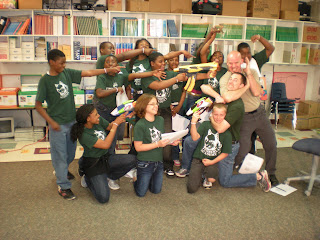 In response to public cries for answers regarding conflict in and outside of our schools Timberland Charter Academy decided to take a different approach in addressing some of the problems facing thier students. In a society where zero tolerance policies, strict legal ramifications and over the top laws are having difficulty providing solutions to the serious problems that our kids continually face, this small school in Muskegon is working to do something more.  Wondering if stiffer penalties and inflexible guidelines are the only ways to deal with issues facing the young people attending their schools, playing in their neighborhoods and walking down their streets, assistant principal Todd Hendricks tries another approach.

The real question that needs to be asked is whether or not the bullying and violence is the problem, or if it is a symptom of something deeper? How can we inspire the respect needed to even have a chance of avoiding the threats of bullying and violence? In the real world there are real problems that are often not addressed and skills that are not taught. Among those skills are the basics of conflict resolution.

On Friday, May 13th twelve students from Timberland Charter Academy in Muskegon, Michigan would get the opportunity to experience some methods of cross cultural conflict resolution and tactical verbal communication skills.  These skills could teach the kids not only how to deal with altercations differently, but how to live more empowered lives in general.

"I’m excited, as usual.  This is one more chance to change a kids life," Vice Principal Hendricks stated in his email.

The two hour session taught by Ronin Empowerment Group  was an introduction to the PeaceWalker Project, a program that trains teachers and students not only how to resolve conflict, but how to live a healthier, more empowered life. The idea is as Mahatma Gandhi said, "Be the change you wish to see in the world."

The session began by asking the kids some questions:

Things usually change over time, not over night, so practice is essential in trying to develop a new habit of dealing with people under stressful and adverse circumstances.

After the questions, the group was introduced to the foundation of conflict resolution, respect and clarifying the life value. This is essential in dealing with conflict. Dr. Robert Humphrey's Dual Life Value is the foundation of the PeaceWalkers philosophical approach. Dr. Humphrey, a Marine during WWII fought on the island of Iwo Jima and later after the war became a conflict resolutionist for the United States during the Cold War. Humphrey's cross cultural conflict resolution theories were put to the test successfully overseas during the Cold War and then later to deal with youth gangs in some of the major cities in the U.S.

After clarifying the ethical perspective the kids were exposed to Holocaust survivor Vikto Frankl's perspective that everything can be taken away from a person except their ability to choose how they will respond to what happens to them. That perspective can never be taken from a person, only given away. Understanding that concept is key in taking responsibility for one's life and maintaining an empowered perspective.

Some of the other things that the kids were introduced to included: How to keep a cool head under pressure, how to create allies, not enemies, how to deflect insults, and of course a specific, step by step verbal communication process called B.A.R.C.C.S.,which provided a framework for dealing with difficult and even dangerous people.

Having some skills on what to say and how to say it, as well as when to abandon negotiations is essential to not only resolve conflict, but to stay safe when the kids are dealing with conflict.

The hope is that by giving the teachers and students better conflict resolution skills that those tools can be used when real life conflict arises in and outside of the classroom.