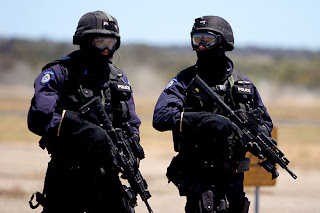 This is a great article on PoliceOne.com written by fellow RGI compadres Jack Hoban & Bruce Gourlie. A great article I thought you folks out there would benefit from as well. Click here for more about Resolution Group International.

Talk to you soon.


The Ethical Warrior: Are ethics tactical?

Our recent article, “The Hunting Story,” tells how a simple soldier in the back of a truck was able to activate a feeling of human equality between relatively well-off Americans and destitute villagers in a poor, allied country with just a few words and a challenge. When asked to articulate why all people feel that their lives are equal he said, “I don't know why they value their lives so much. Maybe it's those snotty nosed kids or the women in the pantaloons. But whatever it is, they care about their lives and the lives of their loved ones, same as we do.”

Human equality and the “inalienable right to life,” are the bedrock premises underlying the Ethical Warrior concept. All other behaviors and cultures are relative, but the Life Value is universal. Certainly, we address illegal behavior — that’s our job. We absolutely don’t have to respect criminal values, but we still must respect the life of the criminal, or our enemies, if we are true ethical protectors. But that begs a few very important questions, including:


• With such an emphasis on values — do we risk making LEOs “too ethical” to deal with immoral and implacable criminals?
• Wouldn’t it be better only to focus on protecting our own lives and the lives of the innocent?
• Don’t we put ourselves at additional risk by trying to also protect the “bad guys?

We agonized over these points in the Marine Corps Martial Arts Program (MCMAP) and it comes down to this: should Marines be trained as killers or protectors?


• Are “protectors” as prepared for the realities of war as “killers?”
• Will ethics training somehow make Marines “soft,” and less capable of accomplishing the mission?
• When a Marine is in a fire fight with his sights on an insurgent who is shooting back, will he suddenly freeze, say to himself “that guy’s life and the life of his loved ones is as important to him as mine are to me,” and fail to pull the trigger?”

Law enforcement officers might very well ask themselves the same question and many have expressed to us their concern. Our Ethical Warrior approach has even been called, “not aggressive enough.” As a Marine and a soldier, rarely are we called not aggressive enough! So is being an Ethical Warrior too soft or not?
Anecdotally, one may hear both sides of the argument from sincere people who have “been there.” After a lot of thought, we still don’t know the answer definitively, but imagine the following scenarios:

The same seems to be the case in law enforcement. Obviously, good law enforcement officers don’t think of themselves as killers, but even if they only think of themselves as criminal-catchers, that perspective creates a certain mentality — the mentality of a collector of human garbage. You may even think that your approach must be just as ruthless as a criminal’s — only “different.” This, we believe, is a trap. Taking the approach that you must “out thug the thug,” may start to color your psyche in a very negative way. And it is not necessary. Protectors are more dangerous than thugs. We wholeheartedly believe that this is because their cause is purer and their bodies are stronger.

One of the definitions of the word “tactical” is: “a maneuver or plan of action designed as a way of gaining a desired end or advantage.” What is the desired end-state if faced with ending a violent encounter or taking a dangerous person into custody? It is to accomplish the lawful action while protecting ourselves, innocent others, and the criminal if possible. Of course, the desired end is not always possible and we may need to use appropriate force if the criminal poses an imminent threat. Force is used not just because we’re following departmental rules and guidelines, but out of a genuine desire to protect life. Just like the bear with cubs, our power to overcome danger is born from our duty to protect.

We believe an Ethical Warrior is not only more moral, but more psychologically — and tactically — powerful than a criminal. What is more fierce than well-trained, ethical law enforcement professionals engaged in the performance of their sworn duty to protect and defend the innocent people on their watch? We can’t think of anything. Can you?

By the way, it is no secret that Marines do pull the trigger when it is necessary to protect their lives, the lives of their fellow Marines, and the lives of others. As an Ethical Protector, you will, too.

This article was written for and can be found on PoliceOne.com


About the author:
Jack E. Hoban is president of Resolution Group International and a subject matter expert for the U.S. Marine Corps Martial Arts Program. Bruce J. Gourlie is a Special Agent of the FBI and a former U.S. Army infantry officer.