The Stone Cutter of Notre Dame 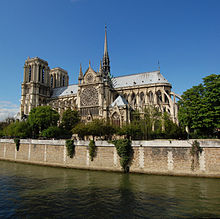 Here I sit in one of my favorite coffee houses, sipping on my Harney & Sons Hot Cinnamon Spice Tea, listening to some Ronnie James Dio and reflecting about 2011 and of course looking forward to what 2012 has yet to bring! Before I go into too much detail about my thoughts let me tell you a little "Tie In Story." I call this one, "The Stone Cutter of Notre Dame." I don't remember where I picked this story up from, so for that reason forgive me if I don't recite it word for word. I changed the title and adapted things to suit both my purpose of telling it as well as my fading, sometimes ill tempered memory. So without any further ado:


"The Stone Cutter of Notre Dame"
One day the foreman of a very large stone query was out doing his rounds checking on all of the workers who were cutting stone into bricks that were to be used in constructing the great Cathedral of Notre Dame. As he walked he came across one of the workers grumbling and very unhappy with life. The foreman asked the worker what he was doing? To which the worker replied, "What's am I doing?! Isn't it obvious? I am working out here in the hot sun cutting these huge stones into bricks. It's back breaking work. And look around, no matter how many rocks I finish there are more rocks to chisel. This project is so immense it will never be finished in my lifetime. It's endless! So, if you would excuse me I have to get back to work."
Under normal circumstances the foreman would have fired the worker, but he had known this worker for a long time and knew he could be a bit cranky, however, he never missed a day and he did good work, so the foreman just smiled and agreed that carving stones into bricks was very hard work and kept moving.
As the foreman walked along he came upon a second worker who was also carving stone. Because of the response of the first worker the foreman was hesitant to ask the second worker what he was doing, but being that was his job, he asked all the same. Upon hearing the question the second worker replied, "What am I doing? I am supporting my family. Although the work is difficult and very taxing, it supports me and those I love, so I am thankful for it. And because this project is so large there is job security which makes me feel safe in knowing I will be able to provide for myself and my family for my entire life."
To this the foreman nodded and agreed on all of his points, knowing that each was true.
Finally, before finishing his rounds the foreman came upon a third worker who was moving with conviction. Seeing his dedication the foreman asked him what he was doing? The third worker looked up from his work, brow red and sweating from the sun and replied, "I am carving the foundation to the great Cathedral of Notre Dame which will bring enlightenment, knowledge, and peace to many peoples lives for generations to come. I know that this project cannot be finished in my lifetime, which makes my job even more important. The efforts of others will be built upon my own, so you'll have to excuse me my friend for not chatting longer, but there is much work to do."
The foreman was at loss for words as he thought about the connection that this laborer felt to his own work and how that drove him to excel in everything he did. He began to understand how powerful perspective and belief was in everything we do.The deeper connections to our daily lives is what keeps us on track and motivated to continue on. It makes for a more fulfilling and prosperous path.
Live, Protect, Inspire & of course... Enjoy the Ride!
Best,
~Craig