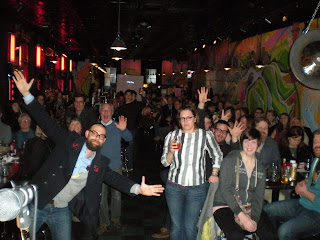 It sounded so easy at first. This would be just another speaking engagement right!? Last year I spoke at just under one hundred and thirty engagements, seminars or trainings. Now this number doesn't include my regular teaching schedule or networking meetings which would add another four hundred plus individual events. So, in light of that you may understand why I figured that speaking at this Pecha Kucha Grand Rapids event would be a fun little challenge.

You may be wondering what is this Pecha Kucha Night anyway? Well, PechaKucha Night was devised in Tokyo in February 2003 as an event for young designers to meet, network, and show their work in public. It has turned into a massive celebration, with events happening in hundreds of cities around the world, inspiring creatives worldwide. Drawing its name from the Japanese term for the sound of "chit chat", it rests on a presentation format that is based on a simple idea: 20 images x 20 seconds. It's a format that makes presentations concise, and keeps things moving at a rapid pace.

My first challenge was to take the PeaceWalker Project idea and be able to describe it in 20 x 20. That is twenty power point slides, at twenty seconds per slide, which equals six minutes and forty seconds. Now keep in mind that normally a simple intro of this program is typically sixty or ninety minutes long. The kicker was also that I had no control over the timing of the slides; they would cycle automatically. That means no wandering thoughts or words. I had to strip this concept down so that it was understandable and inspirational in a record speed of 6 min, 40 sec. For those who know me... you may understand how challenging I would find this to be.

This was a timely challenge. One of my goals this year is to work toward condensing my thoughts and words to be more concise. In effort of this I think the universe came to my aid to help me train and practice.

I began stripping away all but the essence of the PeaceWalker message that would fit into the 20 x 20 format. This was not going to be an easy task, so to help me on my journey, once again the universe came to my aid. As I was searching for ideas in Schuler Books I ran across Dan Roam's new book "Blah, Blah, Blah: What to Do When Words Don't Work."  It ended up to be the perfect book for my quest.

After countless attempts I finally put something together that I thought was a pretty good place to start. The next step was to try it out. So I had to time the power point slide show with the verbiage. Now there is obviously an easy way and a hard way of doing this and I of course chose the hard way. One would think that I could have found a much more efficient way of keeping time of advancing the slide show as I spoke. And of all of those ways I chose none of them, rather I propped my laptop up on my living room tv (no flat screen for me folks, its a vintage 2001 Montgomery Ward going out of business sale 27" console tv that I picked up for double what you probably paid for your 75" flat screen from BestBuy this past Christmas Season... hey, what can I say!? It still works just fine AND I can put laptop on top of it!).  Ok, now all I needed was a timer. Thanks to Meijers my tv is propped up on an inexpensive yet stylish entertainment stand on which sits my small Panasonic stereo. The stereo has a digital counter. Now that I have a way of seeing the seconds go by, all I need is a song that is the right time. Enter Dio. That's right, Ronnie James. So, in the stereo sits a cd, and on that cd there is a song by Ronnie James Dio called Sacred Heart. It is the second song on his 1985 album of the same name. Why did I choose this particular song? Well, if you read my last couple blogs you may have realized that I have been a bit of a Dio kick lately and being that I happened to have the cd in my player and the song was six  minutes twenty seconds long, it seemed to make a good enough improvised timing devise for me to keep track of when to advance my slides.

My first taste of nervousness really came after watching a video of Will Oatman . He was funny and he juggled the entire time! Neither skill I really posses. I am a trainer, not an entertainer. Oh, and did I mention that I can't juggle either. After watching Will's video I got that feeling in the pit of my stomach that I may have made a grave mistake taking this on. Even after hours of practice the feeling didn't go away, if anything it got worse as the time got closer. Then the event night came. Aside from a couple appointments, I spent pretty much the entire day polishing the delivery of my presentation.

It was snowing and cold. I packed up my things, got in my car and began driving down to Stella's Lounge downtown Grand Rapids, Michigan. I arrived early and circled the block a few times looking for a parking space. I found one a couple blocks away. Parked and walked to the venue.

As the night ramped up, so did my nerves. I haven't been this nervous in a long time. Was it the venue? The fact that I wasn't in control of advancing my own power point slide presentation? The fact that I couldn't juggle?! All possibilities I suppose. Regardless of what all of the factors were, the truth was that I was having a near panic attack! I couldn't remember my presentation at all! I couldn't catch my breath! I was perspiring... man it was HOT in here! I wanted to cut and run. That sick feeling in the pit of my stomach was something that I haven't felt since asking Tonya Jenkins to skate with me during couples skate in the 6th grade. This was ridiculous! I had to get myself together. So, I began my breathing exercises and changing my self talk and see a positive out come rather than me being tared and feathered on stage while I was laughed at, just before being run out of town on a rail! It would be good to face this challenge and get it over. Great plan... until Dan Terpstra of Terpstra Photography tells me that I am will be the seventh presentation. That's right, number seven out of eight presentations. Greaaaaaaaaaaat! Must reframe my perspective: "Seven is a lucky number! Right?!"

Presentation after presentation is performed and then a voice announces MY name over the sound system.Uh oh! This is where the rubber meets the road. Time to face my fears and the crowd. Here we go, time to put my money where my mouth is so to speak!

As I walk away from my table toward the small lit stage the feeling in my stomach was that same feeling I got when I bungee jumped from a hot air balloon in Colorado years ago. It's GO TIME! Embrace the feeling and use the adrenalin to better perform.

You may be wondering how things went?! Actually, after getting up on the small stage and breaking the tension with a quick photo (shown above); once I got into the groove things went well. Overall I was happy with how it all went. I was thankful for the opportunity to get the chance to present. I gained much from the entire experience. As a matter of fact Dan and Rob Terpstra of Pecha Kucha Grand Rapids asked me back to perform again at their next event sometime in April. I think I might take them up on it!

Until next time gang!