Against The Stream Krav Maga (by Moshe Katz) 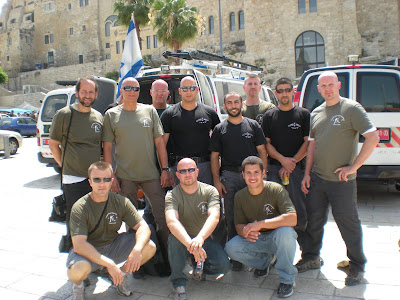 So Tour and Train November 2013 is over, and my friend Athos is one of the last to leave. We are at my house enjoying one last cup of coffee, l'ultimo caffè. When I was in Italy I purchased some Italian coffee, which is now coming in very handy. Athos, as a proud Italian, prefers making Italian coffee. Anything else is a compromise.
~
Each morning of Tour and Train Athos prepared us Italian coffee, a little taste of Italy, here in Maaleh Adumim.
~
As a new student and as a mature man, Athos offers great insights into martial arts and self defense. I have come to understand why he chose IKI Krav Maga for his training. Athos is a respected researcher and professor at a distinguished Italian university, he is a man trained to notice details and make observations. Through many conversations I have come to appreciate his sensitivity and his awareness of details.
~
As I have noted many times Israelis like to present Krav Maga in a macho sort of way. Daily we are bombarded on youtube and Facebook by the young and dumb, the "Tough Guys" who want to perpetuate the myth of "Military Krav Maga" and the image of the "Bad Ass Krav Maga instructor".

He chose IKI because we do not present this image. As he said, "I am a professor, I do not want to come home injured and handicapped, I was afraid that I would be hurt while in Israel, so I hesitated to join any Krav Maga program."

AT Mt Herzl with Tour and Train. Monument to the Israeli volunteers during World War Two, (an unknown chapter in history). Athos from Italy, front row seated on our right, light green T shirt. His eyes convey his deep feelings about this experience.
He took his time, nearly 6 months, and researched on line. I appeared to be a "more sensible human being", he gambled on me and I met his expectations. "Your techniques are very effective for the street but you do not hurt people while training."
~
He explained in his native Italian, which he is more comfortable with, that...I am not young, and I am not experienced, I need an instructor I can trust.
~
I told him that in fact I had written blogs on this topic; when you are fighting, competing, it is your job to defend yourself. But when you training and you are allowing your teacher or your training partner to use your body and limbs, you are trusting them not to hurt you. When a teacher or training partner hurts you, they have broken this trust.
~
And yet, too many "Israeli Krav Maga" schools do just that and pride themselves on it. In fact they mock teachers such as myself as being "soft". In their "tough guy Krav Maga Training", there is no smiling and many students will walk away badly hurt, sometimes with permanent injuries. To them this is a "badge of honor".
~
We believe that we can train hard and effectively and yet be gentle and safe. As Athos pointed out, when he teachers, there is a way to teach a first year biology student and a 5th year biology student. If you hit a first year student with the "heavy scientific" load of a 5th year student, you will only harm him. You need to bring him in to the field slowly, step by step. This is how he views our Krav Maga as well.
~
The way one trains and the one teaches is a reflection of how they view themselves.
Recently we met two instructors, from an outside source. One was older and one was younger, but as Athos pointed out, it was not necessarily because of the age, it was more a mentality and level of maturity that mattered.
~
The younger man was hard, and, insecure. He kept asking for feedback, "How am I doing? What do people think of me?". The older man only smiled. He never asked for feedback, he did not need it.
~
The younger man hurt at least 3 participants during the training, the older man hurt no one. Not here, not know. In the past, during active duty, the older man did hurt people, but he prefers not to speak of it, he is a legend among those who know. He is the type of man that movies are made of. Only with him it all happened in reality, not just in the movies.
~
Athos is my kind of student, a wise man is our best student. He was able to see the truth. The insecure teacher hurts his student, the mature teacher guides his students safely. You can teach effective Krav Maga without hurting and intimidating your students in the process.
~
When I was a child, a student at the Hebrew Academy  of Nassau County, our great teacher and rabbi; Rabbi Meir Fendel, used to speak of Rabbi Abraham Kook. He referred to him as the "Man who went against the stream". This clearly had an effect on my young mind.