The Skipping Stone: A Japan Trip Review by Tony Notarianni 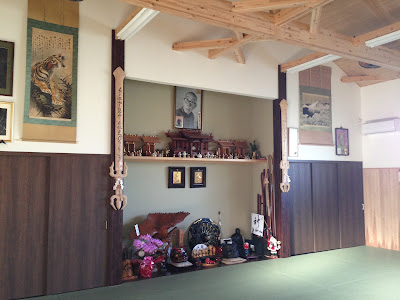 When I first arrived at the new Honbu, I was incredibly impressed by its fresh character. A lot of thought had gone into layout and facilities, while a bright and well decorated interior provided a clean backdrop for Budo training. As much as I miss the old training hall, it definitely felt like an upgrade. The famous chalk board schedule still hung upon the wall, and I was excited to see that I would have the chance to train with many Shihan during my stay.

The first class was with Nagato Sensei, and immediately my attention was drawn to his movement. It seemed that as he demonstrated the initial grab, punch, or kick attack would be the same, and he might even travel in the same initial direction, but from there it would change each time. As the attacker fought back or readjusted balance, the defenders flow would just continue, circumventing the opponents strength and patiently letting a technique unfold naturally.

Nothing was really completed, one moment it appeared that an Omote Gyaku was going to be applied, but then it would suddenly transform into Ganseki Nage, in this way I saw a full flow of Kihon Happo techniques demonstrated, I felt this significant and so it stuck in my mind.

Grandmaster Hatsumi Sensei was of course the heart center of inspiration. I actually had the opportunity to see him teaching five times during my trip and all my observations have since overlapped. He mentioned that this year he had been focusing on Muto Dori, but it felt like he was trying to explain that this represented more than just empty handed defenses against a sword wielding attacker. There was a feeling to it, which was always there, regardless of whether he was armed or not.

Often he repeated the importance of not 'evading' the attack quickly, but to find the right rhythm and space. He also demonstrated the use of very light touch, sometimes using just a finger to control a cover point on the attacker. On a few occasions he didn't even need to touch the opponent, simply covering the important spaces was enough to alter the opponents next move. In fact, he even said not to see the opponent as an opponent to be beaten or defended against, but rather as a collaborator.

He often used his elbows to control, leaving his hands free to strike, or take other points, all in a natural flow. He likened this to the concept of the skipping stone, bouncing across the water. I felt that much like the skipping stone, the outcome is predetermined by the conditions, but any slight variation in those conditions appear to cause vastly deviating visual results. He said the important thing to do was to keep going along with the flow, and to have faith that one will survive.

Another notable concept was his usage of fulcrums and levers, especially when employing a sword or staff. He often found a way to set himself up, so that a simple soft movement of his body exerted incredible natural force against his opponent. Sometimes he even asked for multiple opponents to attack, and he was able to leverage them against each other. He did warn us not to take his Muto Dori too seriously though, and went on to show us how as a swordsman he could easily cut by utilizing the same flow and feeling as if he had no sword.

Hatsumi Sensei actually had an extra class for his Birthday. He talked about how he had spent the last 42 years working on what he had learned in 15 years with his teacher Takamatsu Sensei. He finally feels that he can do justice to the titles he received, and later mentioned that it is sometimes necessary to grow into a title or award, which has been received in advance of reaching the required ability.

He said that he has had a good time during those 42 years, he did a lot of travelling around the world teaching and spreading his art during less turbulent decades. Now however, it might be that as Budoka we have to step up to become examples for future generations as the world itself is changing. This change, and need to evolve was referenced often. Next, next, next....what is going to happen in the next cycle, it felt like a lot of that is really up to all of us now.

I studied with all of the Shihan that made themselves available, my cup was full and emptied several times. I realized I could not take back home their techniques or form, but their advice and training methodologies were certainly something I could work from. Apart from which, their skill and ability are all an inspiration to keep going, reference points to what is possible if I just keep pushing.

Hatsumi Sensei also talked about this, he said that when one hits a wall, one should not give up, but keep trying to find a way through. He said even if the wall is really strong, you can broadcast through it, and that way still reach the other side. That we should not let these walls be such a determination of who we are. With such motivational words, it was really a powerful training environment.

There certainly was a great deal of energy at the Dojo, I was awestruck not just by Hatsumi Sensei and his skills but also at the entire atmosphere he has created. It was very hard not to be distracted and I was reminded about Jack's teaching on the combat mindset during the year. I began to wonder in the skipping stone analogy whether we are supposed to be the skipping stone, or the water. 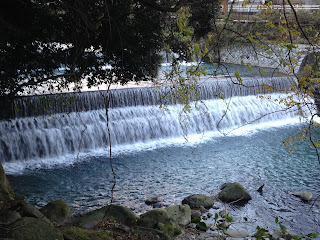