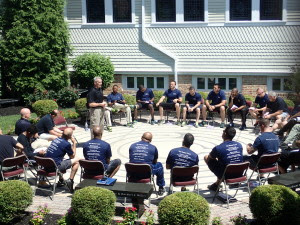 
Some things in life cannot be given, they can only be "stolen."

You may be thinking, "What the heck is Gray talking about now?!" Well, let me explain. I'm not talking about ripping someone off, plagiarizing or pirating the next Star Wars movie before it's released. I'm talking about learning, applying and succeeding at something.  I have heard this "stealing" idea from many of my martial arts instructors regarding training. However the same idea pertains to other things in life as well. My interpretation of this "stealing it" concept can mean many things. I wanted to explore a few ideas.

First, you have to want it. It seems that we are used to being spoon fed now a days. As a result many people often give up too soon, feeling that the path should be easier and their guide should bend over backwards to make sure the student is learning quickly and easily. Well, it doesn't matter what it is, if you want it, have some conviction, set the pace and work hard at going after it. If it's worth having, it probably won't be convenient. Yes, there will be barriers, that's part of the journey. Don't make excuses. You have to want it enough to overcome the barriers. It won't be given, it has to be stolen. Most will fall one more time than they get up. The successful focus more on getting up than worrying on falling.

Here's a tie-in story for you. It's an oldie but a goodie!

An energetic young business man meets a guru one day while walking along the beach. It's the same guru so many have told him about. Apparently, this guru is the wisest and most thoughtful person in the world, but usually inaccessible. Knowing how to interpret fate, the young man asks the guru a question:

"What must I do to be successful?"

The guru glances at him in that zen, guru-like way and says he'll share with him how to be successful tomorrow morning at 4 a.m. at this same beach.

The next day, the man shows up, nicely dressed and finds the guru near the shoreline. He asks the guru the same question. The guru responds by asking the young man to follow him out into the water. The man is confused at first, but figures the guru must know what he's doing, so the two wade into the ocean together.

The guru turns and says, "Let's keep going." So, they walk in until the water is up to their knees, then their waists, then their chests. The man, suit soaked, now asks, "Guru! What does this have to do with success?"

"Do you want to be successful?" the guru asks.

Just then, the guru dunks him under the water. The young man fights to get back above water, but in addition to being wise, the guru is also strong. After about 15 seconds, the guru lets him back up. Confused and infuriated, the young man rails, "What was that?! What are you doing?!" Immediately, the guru pushes him under and holds him down again. After about 15 seconds, he lets him up. The man is irate now. "What are you doing?! I asked you how to be successful and you're trying to drown me!"

The guru calmly replies, "Do you want to be successful?"

Before he can finish, the guru dunks him a third down, holding him down longer than before. He finally lets him up. The man is gasping for air now, trying to regain his bearings.

The guru states, "Until you want success as badly as you wanted air just now, you will never achieve it."

When it comes to teaching, I'll go 49%, but you have to give me at least 51%. Trouble arises when you want it too much for the other person. If you do, you then have to ask yourself, "Why do I want this so much for them? Why do I want it more then they do? Why am I attached to this so much? Is this healthy for both of us?"

No matter how much your instructor wants for you to be successful, you will have to do the work, overcome whatever barriers life throws at you and keep going in order to succeed. You are responsible for your own training. You are responsible for your own life, even when you don't choose the circumstances you find yourself in. Remember if you really want to be successful in whatever you are doing in life, it can't be given, you have to "Steal It."