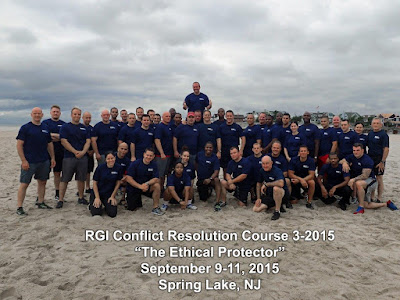 The New Jersey beach was silent as I warmed up with the the Camden County police officers in preparation for Lt. Col. (Ret) Joe “Marine’s” infamous partner combat conditioning course. The day was September, 11th  2015, the anniversary of a dark day. A day that most professional protectors are especially respectful of. A day that we hope is never repeated.
.
I can think of many good ways to commemorate 9/11: Showing respect for those fallen; extending condolences to loved ones of the victims; giving thanks to the protectors who are now on duty and of course, training to be a better protector. And that is exactly what we were doing this past Friday, September 11th 2015, in the morning beach sand of a small New Jersey town not too far from where the Towers stood in New York City.
.
When we think of what happened and what we can do to prevent something like that from happening again, I am reminded of our diversity, our strength and our resilience. We are ALL protectors and each of us contributes in our own way. Some of us are professional protectors, be it firemen, police officers, military personnel, medics, nurses, etc. others protect in different ways, maybe financial, maybe helping with the clean up or the rebuild. In the moment of crisis many civilian citizens become the warriors and protectors of others who were hurt, frightened, or somehow incapable of protecting themselves.
.
Out on that Jersey beach early Friday morning working side by side with those officers my mind was focused on my task at hand as Joe Marine put us through the paces. The bigger picture was that we were coming together as ethical warriors. Sharpening our skills to become better protectors to hopefully prevent another 9/11 from happening and when something does happen again we trust that through our training we are more equipped to deal with whatever we are up against.
.
After we were finished making sugar cookies out of ourselves my friend and colleague Artie Mark shared his first hand experience of the 9/11 terrorist attack. You wouldn’t know it by looking at him, but Artie is the real deal, a true protector and hero. He is one of the humblest, coolest guys that I know. He looks like an average Joe. He doesn’t boast or act like some arrogant ‘delta bravo.’ If you didn't know him you wouldn't suspect that he spent over 20 years on some of the toughest assignments in New York, including a special crime unit that put him in the most dangerous neighborhoods in NYC. His job in those days was to seize illegal guns and drugs to of course protect people from the violence that was out of control at that time. I am honored to work with Artie and call him a friend.
.
9/11/2001 began as a normal day. Artie was on his way to a court hearing when a plane hit the first tower. He was only blocks away when he got the call and rushed to the scene. Still believing that the incident was some accident Artie saw the second plane fly right over his head striking the second tower. It wasn’t until he heard about a plane hitting the pentagon that the realization came over him that we were under attack.
.
Artie made four trips into the building helping people to safety. On his fourth trip Artie was helping an elderly woman leave the building, when he ran into an old schoolmate who he hadn’t seen in years. Now a NYPD officer as well, the two quickly reconnected. After Artie helped the lady, his old friend asked him to help him tape off the parameter around the first tower. An act that actually saved his life!
.
While Artie scrambled to tape off the first building a bike courier (like the character Kevin Bacon played in Quicksilver or Joseph Gordon-Levitt in 2012’s Premium Rush) sped past the barricade. Artie yelled for him to stop, but in true New York fashion the courier ignored the cry. It was a mistake that cost the courier his life. The bike messenger got no more than thirty feet from Artie when a giant sheet of plate glass fell from the burning building cutting him in half, right before Arties eyes.
.
“It was just like out of a movie,” Artie said as he shared the experience.
.
A moment later the entire tower collapsed, causing Artie and anyone in the area to run for their lives for a moment, before returning to assisting others.
.
Artie said that if he hadn’t stopped to help tape off the first tower he would have certainly died as the building collapsed with him in it.

“It was like the world was coming to an end.” Artie shared with me and the rest of the RGI team.
.
He, the other officers and emergency rescue personnel worked frantically to save as many lives as possible. Artie remembers the legs of his pants being soaked with the blood of the bodies that were exploding all around him from the people jumping out of the buildings. It was like the scene of a movie. Sublime.
.
A couple days before this beach training Artie picked me up from the airport. We drove through downtown Manhattan and he showed me exactly where he was standing when he saw the tower collapsed.
.
After the attack, Artie pulled security and search and rescue efforts on Ground Zero. 16/6/6: For sixteen hour days, six days a week for six months Artie and other NYPD/NYFD protected, searched and recovered the remains of the victims of the attack. In total, the attacks claimed the lives of 2,977 le and caused at least $10 billion in property and infrastructure damage; $3 Trillion in total costs. It was the deadliest incident for firefighters and law enforcement officers in the history of the United States, with 343 and 72 killed respectively.
.
After Artie finished with his story and we took a moment of silence to show reverence and respect, he went on to say that he knows many of his fellow protectors (and many citizens as well) who suffer from PTSD from the incident, however he never did. He believes that it is his training regarding being an ethical warrior that shielded him from the psychological effects of the experience.
This is why we train.
.
Did I mention how much of an honor it is to know, work with and be able to call Artie my friend? I love you brother! Thanks for sharing some of your path with me! I'm glad you are here. My life and the lives of so many others are not only safer because you are here, we are truly happier whenever you come around. We know that anyone in need has a friend in your presence. How can we tell? You communicate it with everything you do, even when you don't say a word, we can even see it in your eyes alone.
.
All the best & Keep Going!
~Craig