The Grinch Who Schooled Whoville! 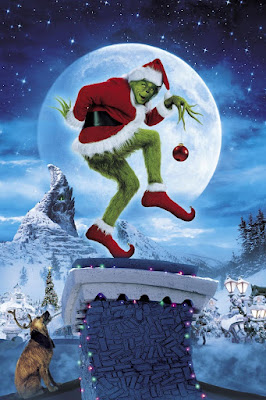 We're in the middle of the holi-daze!

That's the two-ish weeks surrounding Christmas and New Year where work schedules, social events, family stuff and other holiday type festivities intersect with our regular schedules, resulting in a strange 'twilight zone' type feeling, where we aren't quite sure where or when we are in the time/space continuum. Past, present & future meld together with work, family and friends.
How the Grinch 'Schooled' Whoville
Yes, the Grinch can be a crotchety, termite-infested soul with a heart two sizes too small...
However, there are a lot of beneficial things we can learn from him as well...
Especially as it comes to defensive tactics!
Check out what we can learn from how he totally "SCHOOLED" Whoville:
1. Tactical Thinking
Coming up with all those successfully elaborate plans on the spot -- especially when under that kind of pressure -- is a pretty handy skill to have in ye olde self defense "tool box."
2. Leadership Abilities
Even from an isolated position on top of his mountain headquarters, he was able to motivate a small team to carry out a covert night mission against a force much greater in numbers and resources.
3. Ability to Act
While it's true the Grinch is being a jerk when he cleans out Whoville, it's hard not to admire his ability to pull off his plan (in one night!).
(We have to give some credit to Max who pulled the sled...)
4. Problem Solving Abilities
Through the Grinch's ability to improvise, adapt and overcome, he was able to get out of numerous tight spots, from acquiring adequate transportation, to employing an effective disguise to infiltrate Whoville...
And lets not forget, when he was caught mid-operation by Cindy Lou Who, he employed his verbal communication abilities to resolve the situation without incident or violence.
Feats like this prove the Grinch is capable of all kinds of creativity and problem-solving feats and miracles.
And, some pretty clever ones at that...
Who knows... Maybe he was in the Marine Corps?! =)
5. Diplomacy
Yes, the Grinch STOLE Christmas -- looting an entire town of tens of thousands of smackeroos worth of gifts, presents and food (he even took the last can of Who Hash!).
Yet, somehow he was still able to make up for it and he was even given the honor of carving the roast beast!
Wow, talk about diplomacy skills!
(He could have a career in politics...)
These aren't the ONLY LESSONS...
Here are 2 Bonus Lessons from our Grumpy Green Friend to fill your holiday stocking up with...
(1) Always remember that there are admirable qualities even in people we don't like and who are doing dastardly deeds! They're still human, with the Good, the Bad & the Ugly coursing through their souls, just like us.
AND MAYBE THE BIGGEST LESSON IS...
It's easier for everyone to make better choices (maybe even change), when we can separate people's Life Value from their beliefs & behavior... (yep, even the disrespectful, illegal, even dangerous stuff...)
OK, that's it for today.
I hope you had a Merry Christmas...And are getting the most out of your Holi-Daze time!
Soooo....
If you are looking for that perfect gift to give to that hard to buy for person...
Than look no further!
Forward them the link to the Six Day Defense Home Study Course. It's absolutely FREE (I won't tell =)
https://sixdaydefense.com/
It's a great way to help them start their 2021 off right!
Alright...
Go finish your shopping and wrapping!
Keep going,
~Craig