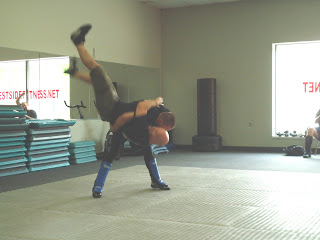 Civilian, Law Enforcement Officer, Soldier, Bouncer, Security Guard... It doesn't matter who:
If you knew that you were going to be attacked by an angry, aggressive assailant tomorrow and you knew how he was going to attack you, how would you train that defense in class tonight? Would you work that technique until you could do it from any position without hesitation. Would you train it so you could concentrate on surviving the assault rather than looking pretty? Would you work it until you understood its principles intimately and responded reflexively to the threat? Would you want to know that your training was increasing your odds of surviving the attack, rather than just some motions you were going through as you got your cardio workout?
Well, I'll let you in on a secret: The defense you are working on tonight may be the one that saves your life tomorrow.
It's a lot like wearing your seat belt:
1) Just because you wear your seat belt doesn't guarantee that you are not going to get in an accident.
2) It doesn't guarantee your survival IF you get into an accident.
3) It simply betters your odds of survival when you get into an accident... and it's too late if you never put it on in the first place. JUST LIKE TRAINING!
Here's a deeper question for you:
If you knew that someone would attempt to kill your child or loved one and you knew how they would be attacked, how would you train to defend them?
Keep going,
~Craig