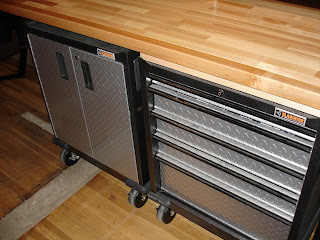 A broad definition of a tool as stated by Wikipedia is an entity used to interface between two or more domains that facilitates more effective action of one domain upon the other. For example, a crowbar simply functions as a lever. The further out from the pivot point, the more force is transmitted along the lever. A hammer typically interfaces between the operator's hand and the nail the operator wishes to strike. A telephone is a communication tool that interfaces between two people engaged in conversation at one level.
Marshall McLuhan famously said "We shape our tools. And then our tools shape us." McLuhan was referring to the fact that our social practices co-evolve with our use of new tools and the refinements we make to existing tools.
So basically tools are those things that act as an extension of ones self to assist in completing a particular task. As our tools evolve so shall our choices, options of the situation and also the evolution increases our ability to create and use even greater tools.
*
When referring to combat the tools are namely the techniques or tactics that are readily at your disposal. Mechanics on the other hand are the skills of being able to work with those tools within a particular situation to facilitate a solution of the task at hand.
An example of someone who has good tools but is not a mechanic would be a person who went out and bought a new $10,000 Snap On tool box filled with a vast array of extraordinary tools, but that person has no engineering, mechanical or construction abilities. The individual may know the basics of how each of those tools are supposed to be used. They may be able to use their screwdriver to screw in a wood screw into a block of wood or their hammer to pound a nail into a 2 x 4, but they don't know the dynamics of how to to fix a car or build a house.
Further, having good "tools" does not mean one is a good mechanic. Many martial artists fall into this category because of their lack of real world experience and/or the way that they train. The opposite of this would be many street fighters, bouncers, body guards, soldiers and police officers who may have good mechanic skills even though they don't necessarily have the best tools (flashy techniques etc.) to work with. These "mechanics" could fix almost any situation with a pair of pliers, a butter knife and a roll of duct tape.
Our goals as warriors should be to create and maintain a well rounded toolbox and learn to be good mechanics so we know how to use those tools (techniques, tactics) in the real world to save our own bacon and/or the lives of others.
Keep going,
~Craig