Saving the Balloons at Caliber 3 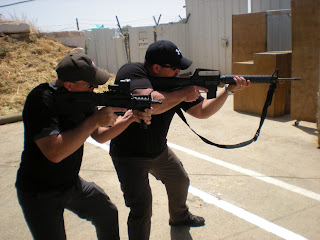 Mike Benson and I at Caliber 3 training facility in Israel

We were all excited to do some tactical shooting at Caliber 3 training facility located in the Israeli Desert. As our van pulled up to the training facility we could hear the rifles shooting and smell the gun powder. It was going to be a great day! We were introduced to our instructor Shi who was a veteran IDF Operative. He currently teaches counter terrorism and security ops to law enforcement, military and select civilians in Israel and abroad. He will be coming to the States in a couple months to conduct a training session down South for a few days.

The session began with two of the younger instructors demonstrating tactical moving and shooting.  Check out the video that Benson took. Very cool!


Now I would like to say that my shooting performance was equally impressive, however that would be a bit of an exaggeration. More on that in a minute.

Shi taught us the Israeli method of shooting pistols and rifles, how to move, run, stop and fire. The methods are unique, yet the IDF finds them to be very successful in the environment that they operate in. Shi first demonstrated the correct method, and then had us follow along. The stances were wide and deep. They felt a bit uncomfortable at first but with a little practice I could see the practicality of them. As we continued to move they began feeling more natural.

After a few practice runs it was time to fire the weapons. We lined up on the nearest firing line and each of the instructors coached us through a couple rounds of shooting. It felt good. Now, I am no marksman, but my grouping was decent; 8 hit the center bullseye the rest were within a four to five inch circle... not bad. However the black cloud was looming... 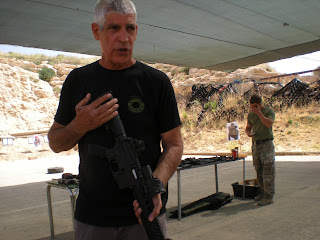 After our training and practice rounds, we were broken up into two teams and reassembled in the rear of the range. We were each given a balloon to attach on our target down range. This was the balloon we were to shoot after running a couple suicide sprints. We lined up and voted who would go first. Due to my performance during the first part of our shooting I was chosen to go first and Elliott second. Little did anyone know that this decision would cost our team the victory. Mike and I were going head to head. We started at opposing sides of the range, we had to run back and forth, go to our firing positions, grab our weapons and shoot the balloon. Easy, or so it seemed. Shi yelled for us to begin and... well, this is where it gets a bit embarrassing... I got a good start on my run, until I turned around for the last leg of the suicide sprint where I lost my footing causing me to almost fall down. Refusing to quit, I managed to recover. I kept a pretty good pace even if I was sprinting on my hands and feet for a few steps. Gaining my footing again I quickly got to my firing position a millisecond behind Benson. I grab my weapon, line up the crosshair of the scope on the big yellow balloon down range, took a breath, squeezed the trigger and... BANG! I completely missed my target. So I shot again, missing once again. Two clips later the d**n balloon was still flapping in the breeze. Elliott was telling me I was shooting low, so I kept going higher until the crosshairs were well above the balloon. Impossible I thought, inspecting the weapon with my instructor. I'm no sniper, but this is ridiculous! After holding my teammates up enough, I motioned for Elliott to go. The weapon I was using was abandoned for another rifle. Everyone except for me was able to hit their target in one or two shots. The instructor and Elliott established that the scope got bumped or somehow jostled and it was no longer sited in. Now I don't know if they were just being nice or what. All I know is this, everyone else did alright... As for me it one of three things: 1) Elliot and our caliber 3 instructor were just being really nice telling me that the scope was not sited in any more and I am really that bad of a shot. 2) I just have a soft spot in my heart for yellow balloons and refuse to harm them in any way. 3) The site was legitimately off and needed to be sited in again. I'll let you be the judge. All I'll say is this in my defense. Everyone else hit their balloon within two shots AND the weapon I used wasn't shot again by the others. My performance for the other portions of the training went well. A set up maybe!? A cruel joke on the American?! =) Hard to tell. My target showed that the last clip of bullets were hitting in the center but low, so the first clip probably went under the target altogether. Needless to say, regardless of the reason, the teasing was soon to follow about my stellar performance ruining our teams chance to win the competition. Any which way, it was a great day of training and Caliber 3 was top notch! I look forward to going there again on my next trip to Israel. (SO you balloons better watch out, cuz I'm practicing! Maybe I'll bring my own rifle next time just to be sure=) 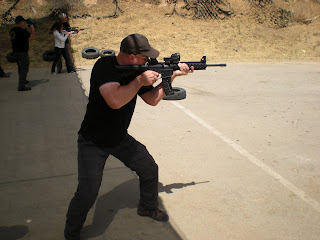 Here's a shot of me when I was actually shooting well! =)

I would write more, but it's off to the range to site in a scope so I can protect a balloon or two. =)