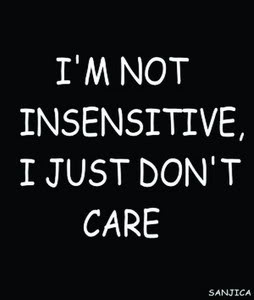 As our world continues to shrink, diversify and change, the effects on our daily social interactions also change. There are no areas in our lives where this shift isn't felt: Places of work, recreational activities, family gatherings, social events, etc. have all be affected by this incredible shift in social interaction.

The internet has increased the level of interconnectedness between average people to an unprecedented level which in the not so distant past would only have been achieved by a celebrity, or politician. Now-a-days it is as if everyone has their own Conan O'Brien Show. Drama is a drug and there are a lot of junkies running rampant.

Lately there has been a lot of buzz about being politically correct, inappropriate or insensitive. These social constructs which were intended to protect and respect someones feelings and life value can also be misunderstood, taken out of context and misused.

Sometimes people are Politically Incorrect, Inappropriate and Insensitive. Other times because of our incredibly informal social structure (especially here in the U.S.) we can naively believe that some people are in our intimate social group, click, or inner circle so to speak who aren't. That lack of consideration may drive us to say or do things that would only be appropriate to people close to us, or who share our relative beliefs. This can come in many forms. One example of this would be calling someone your "bitch." This can be said in a number of ways; one would mean that the person is a close friend or com padre or it can be used to try to intimidate, show dominance, or total disrespect someone. Some may think this is a term that should only be used during certain times informally, however I've been witness numerous times where people thought it appropriate to use this term in more formal settings, such as court... or a formal wedding... Yes, people (you know OTHER people, never us) are stupid that way.

Over the years I have seen many people who don't or can't distinguish the appropriateness of what they do or say. I also see others who are quick to judge what might be seen as politically incorrect, inappropriate or insensitive. Now I am no authority: I am not usually politically correct; I have been seen as inappropriate; and have been accused of being insensitive, however I do my best to respect those around me. You might be wondering how I can be both? It seems contradictory.

Let me explain: I am light hearted in my interactions with people, which often includes a fair amount of teasing and antics that could be misinterpreted by some, however I seem to maintain a balance that allows me to get along quite well with most people from all of the cultures I have encountered. That said, let me share my perspective with you:

Politically Incorrect: A fancy term for covering your ass. I don't really believe in this concept. In my view it is a veneer of corporate speak for saying something in a way that will not get you sued or in trouble. The actuality is that the person may or may not have authentic intention of respecting the other group or individual. In my opinion, we have too many people trying to be politically correct and not enough people being authentic in their desire to be respectful.

Inappropriate: This is an easy one: The social group determines collectively what is appropriate within that group. However, everything is not relative, this must be seen through the Dual Life Value perspective that all life is to be protected and respected. The key term respect is in itself relative. The problem is that our groups are getting more and more diverse and larger, so it is increasingly difficult to determine what is inappropriate due to that growing diversity, casual nature of social interaction and false sense of intimacy (thinking someone is emotionally closer to you than they actually are). Some might say that this is "Common Sense," however in my experience there is no such thing. *Please refer to "bitch" example. We would like to believe that there is a certain amount of etiquette that is standard and there is... but it can be pretty broad.

The holiday season is coming and many of you will be spending time with your in-laws. My guess is you'll see what I mean about common sense (or lack there of) and that many people don't know what is inappropriate behavior, even within the construct of their own family.

Insensitive: This is often said in conjunction with or as a substitute for inappropriateness. This is another simple one in my book. What one may see as insensitive another may find funny, or fine, or tough love, or amusing, or real, or truth, or whatever. So what determines insensitive? To me it is reliant on these things:

1) Intent - Did the person mean to be intentionally hurtful?

2) Interpretation - How was the action interpreted?

4) Follow up - Did the offender acknowledge, apologize or try to make the situation right?

5) Change in behavior - Did the offender change their behavior?


If I were to say something that you found offensive or hurtful, don't get mad without clearly communicating to me that I hurt your feelings. If you believe that I "should" know better, but do not tell me and clearly explain acceptable boundaries; how do I know how to treat you?

If you do express yourself and set fair, healthy, most good/least harm, boundaries and I don't change my behavior but continue to do or say what offended you, THEN you can say I am being insensitive. Otherwise how do I know?

The idea is about being respectful to the life value as we cut through the relative differences and beliefs of cultural behavior & communications. We're not perfect and we are not mind readers. The more we work toward most good / least harm for everyone and the more clearly we can communicate to each other the simpler this is. But as I've said many times in the past, simple is not always easy. Especially in this case.

So there you have it: That is my perspective on that.