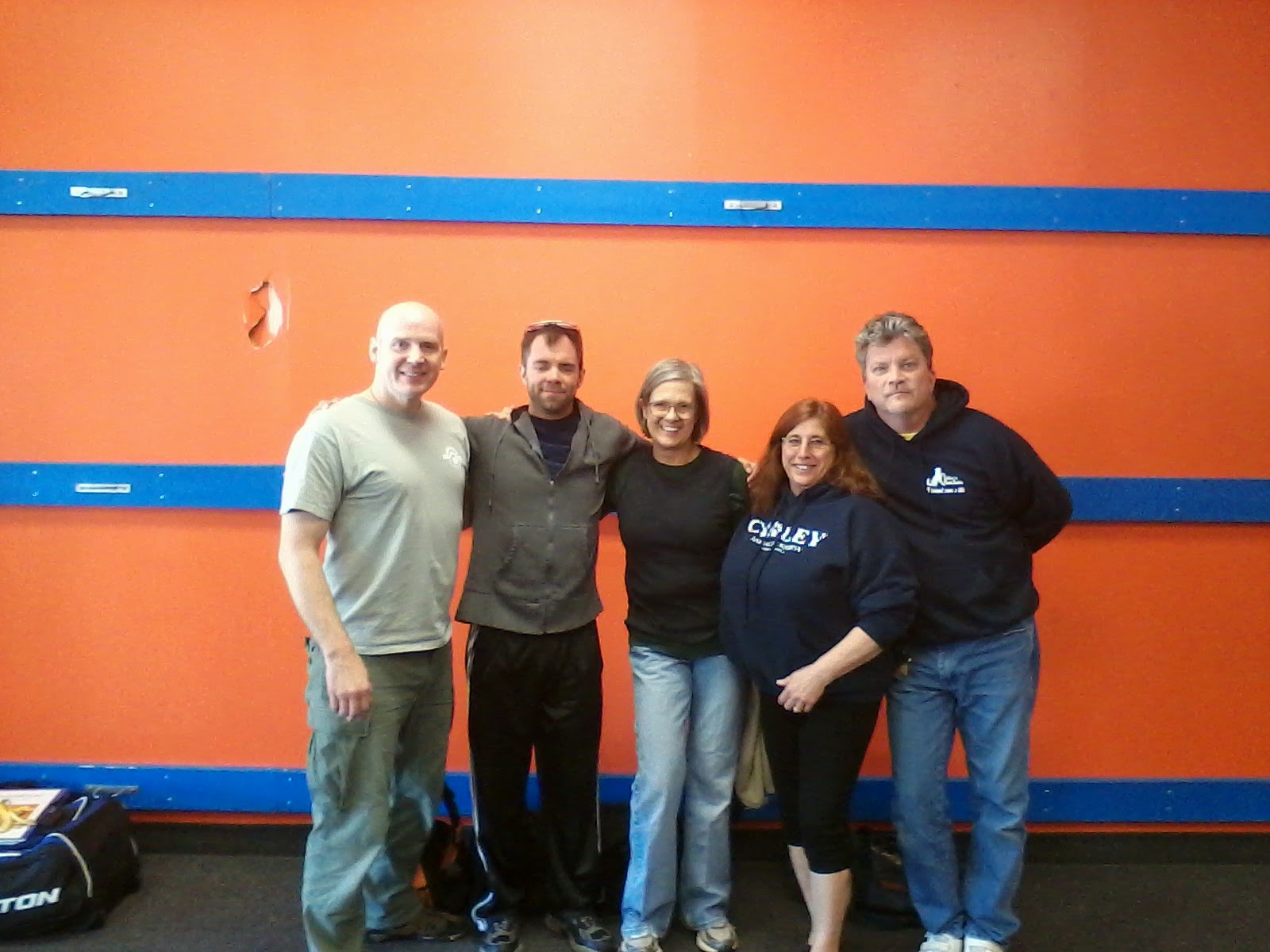 Me (bald guy on your left) and the Crew at Pound Buddies Animal Shelter.
Diana is the gal in the blue hoodie w/longer hair pictured second from right.
www.poundbuddies.org

You have heard me say that sometimes we teach things that are learned today & used tonight, well here is a recent story of just that:

At a recent seminar I had a group of staff members from an animal shelter/adoption agency in Muskegon Michigan poundbuddies.org training with us. For most of them it was their first time exploring this idea of being an Professional Ethical Protector and training in defensive tactics. Although they have a strong protector spirit, they were looking for greater ethical clarification and some tools that they could use when dealing with conflict on the job.

You see due to the nature of their profession at the animal shelter people sometimes are very emotional and upset when they come into the shelter. Sometimes these emotionally charged people can be verbally and even physically abusive, so in effort to be even more professional than they already are Pound Buddies staff were shown some of the foundational elements of being more effective protectors.


1) How to use Conflict as an Opportunity.
2) Understanding how to apply Dr. Robert Humphrey's Universal Life Value concept during conflict.
3) Working toward Most Good / Least Harm.
4) Setting the Pace - How to Not Be a Part of the Problem.

Some of the physical elements that they learned were:

But enough of the lead in, here's their story:

Thanks for the great seminar Sunday. It was really interesting to do techniques that I've done with you in the other seminars and while I was in class! Very challenging!

What I wanted most from the seminar was for my coworkers to be exposed to the protector perspective and get the empowerment buzz that comes with your classes. They all loved it and want more.

Animal rescue has a reputation for sometimes attracting people with a proclivity for tribalism, moral value misfires & ethical passivity, turning people on to what you are teaching makes me feel pretty optimistic about us evolving as an organization.

I went in today for a couple hours and Diana found me right away and said " we used it!!!! "

Diana had a very unhappy and verbally aggressive couple in earlier today yelling, swearing, threatening to harm staff members, the whole nine yards. She stayed calm, wasn't part of the problem, had John call the police, pressed our panic button for staff to get up front. At some point when one of them stepped towards her she moved into interview stance. I think she got the guy who was being pretty threatening to sit in his car and she talked calmly to the woman, offered options and solutions and de-escalated the whole thing!  The woman was able to come back a little later while I was there and calmly get her issue worked out because Diana stopped the fighting, separated her actions from her life value and protected her ' enemy ' so to speak! She was a quick learner!

So thank you Craig! You are officially - by association a k-9 protector as well!

Great job Diana! That is a great real life example of how keeping a cool head and applying some good training helped to protect everyone during a potentially physically violent situation!

If you are looking for training in this unique way of being an Ethical Warrior, please join me in New Jersey for the upcoming Resolution Group International Ethical Protector Seminar:
http://www.rgi.co/courses/nj/1-2014.php

Or if you are in the area here in Grand Rapids, Michigan, we run regular classes and seminars: www.roninempowermentgroup.com

Thanks again for the good words John and Diana, I appreciate you letting me share your story!