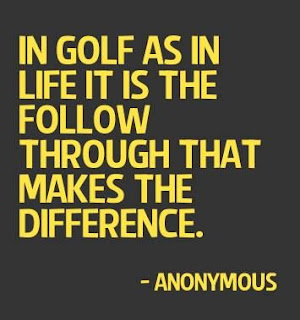 Following through with what you set out to do is imperative to your success in life. Conversely, learning when it is alright to stop and cut your losses is equally important.

What brought this up? I'm glad you asked.

I was thinking about blog posts today and the idea of follow through came to mind. Beginning in 2014 I committed to posting four (4) blog entries per month. I began blogging in 2008 and have remained "fairly consistent" in my posts ranging from 19 to 54 posts per year so far. My lightest year was 2011 I had an average of 1.5 per month. Bear in mind that I didn't blog every month in that year. Some months I had several posts and other months there was a complete absence of any writing whatsoever.

Blogging 4x/per month may not sound like much, but it seemed to be a huge commitment to me. Even if I didn't actually write the article myself, posting four times each and every month seemed like a big step.

Before I decided to make that commitment, I had to ask myself, "Why do I want to do this in the first place?" Were my reasons for wanting to tackle the challenge clear to me? In this case they were, I wanted to continue to build and stay connected to the community that I was creating.  As well, I wanted to continue to share my thoughts and practice my writing skills.

It was easy for me to get intimidated about committing to four blog entries per week. Especially when I look at people like Seth Godin who blogged every single mofo'n day. Everyday. Evvvveeerrryyydddaaaaaay. E-V-E-R-Y-D-A-Y!!

And to add insult to injury, he shares really cool, insightful things, which later he often turns into books.


My fear is that I haven't gotten to the point where I can offer up a great or even good idea each and everyday. I know that it isn't that I don't have good ideas, because I do have some pretty insightful things to share. Much of it is that I have to be in that creative place where the ideas flow from me in a clear way that is understandable. Some days I'm on, others, not so much.

"The hardest thing about writing is writing."
~Nora Ephron

I've noticed that the more consistently I wrote, the more often those good ideas came and the more clearly I could articulate them. If I waited until I "felt" like writing, I wouldn't write very often at all. BTW, this principle applies to pretty much anything. For example if I waited until I was in the mood to workout I would probably workout once every other week if I was ambitious. Rather, I discipline myself to commit to creating a habit of working out. I get better results overall, even though every single workout may not be stellar.

The concept is simple:

There is my thought of the day!

Two down, two to go for this month!