The Crow and Peacock 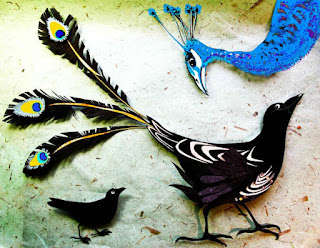 A crow lived in the forest and was absolutely satisfied in life. But one day he saw a swan. “This swan is so white,” he thought, “and I am so black. This swan must be the happiest bird in the world.”
He expressed his thoughts to the swan. “Actually,” the swan replied, “I was feeling that I was the happiest bird around until I saw a parrot, which has two colors. I now think the parrot is the happiest bird in creation.” The crow then approached the parrot. The parrot explained, “I lived a very happy life until I saw a peacock. I have only two colors, but the peacock has multiple colors.”

The crow then visited a peacock in the zoo and saw that hundreds of people had gathered to see him. After the people had left, the crow approached the peacock. “Dear peacock,” the crow said, “you are so beautiful. Every day thousands of people come to see you. When people see me, they immediately shoo me away. I think you are the happiest bird on the planet.”

The peacock replied, “I always thought that I was the most beautiful and happy bird on the planet. But because of my beauty, I am entrapped in this zoo. I have examined the zoo very carefully, and I have realized that the crow is the only bird not kept in a cage. So for past few days I have been thinking that if I were a crow, I could happily roam everywhere.”