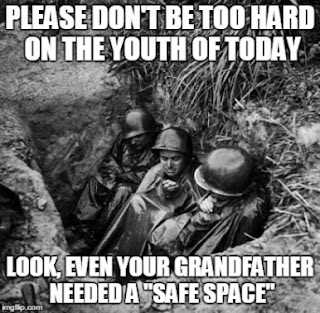 re·sil·ience
rəˈzilyəns/
noun
Resiliency: A word many seemed to have forgotten. "Sticks and stones may break my bones, but words will never hurt me," has been replaced by 'safe zones,' trigger words, speech codes and zero tolerance policies. At the other extreme; killing and suicides resulting from varying forms of mental illness and repressed anger from bullying.

It appears that the idea of 'being offended' has gone from rude or controversial to illegal, as has knowing how to appropriately stand up for yourself. Speak out against the public majority (whatever that is) and pay the consequences. Overreacting to a situation a.k.a. "making mountains of molehills," is something that seems to be prevalent as well (thanks Ricki Lake and reality TV). It seems that we struggle with perspective and balance. We over react to certain things, under react to others, complain, feel entitled or hold emotions in until it bursts from us with venomous fury, be it riots, active shooting, or other forms of violence.


I'm not condoning disrespect toward others, treating people like crap or calling someone (or a group of someones) derogatory names. Nor am I trying to trivialize discrimination or the tragedy of someone taking a life (be it their own or others) due to any form of bullying including that of an emotional, social or institutional nature. However, when did it become a law that being offensive was a punishable offense? I'm not talking verbal slander or threats of harm. I'm referring to "Land of the brave, home of the free." stuff. Does that statement hold any truth, or is it just a cool "'Merica" bumper sticker that goes on the back of a built in the USA truck w/a gun rack in the back window?

Now let's be straight, freedom of speech doesn't mean that you or I can yell "BOMB" in the middle of an airport, or use my 'Freedom' to continually harass or physically threaten others. Our freedom stops where someone else's begins. But, where is that? What does that look like? It seems we aren't sure. It's our clarity, confidence and our ability to protect the right things that allows us our personal freedom, differences in beliefs, perspectives and opinions. Our freedom to discuss, debate, and yes, even offend! Political correctness is the thin veneer that has replaced respect. Are we so fragile that we can no longer handle someone disagreeing or (heaven forbid) even insulting us?


"If necessity is the mother of invention than adversity is the father of resiliency."


If I call you a son of a bitch, will that land me in jail? If I tell you to go fuck yourself or say that you are a douche bag, should I be fined or put on probation? What if I spout off about how all bald headed middle aged men are stupid assholes who don't deserve to live in this country, so they should be thrown out? Yes, a rude, offensive and prejudiced statement, but should that be a punishable offense? Who will be our moral police? Who will choose what is acceptable and what isn't, as well as what the cost should be if you violate the rules?  More laws to keep us in check? Who will those laws favor? Is forced moralism necessary, effective and even possible? If you don't act properly, we'll make you. What's acting properly?! We'll tell you!

How about suing a school or organization because someone felt as if they weren't treated well? Yes, some cases are totally legit, however is every perceived harsh statement, off color comment or difference of opinion grounds for dismissal or a lawsuit?


I think we are bigger than that. I believe we are capable of being confident in the face of adversity and can distinguish what is rude vs. unlawful or dangerous. Clarity, courageousness, and skill can accomplish this more effectively then acting like spoiled adolescents who make demands, whine and throw temper tantrums when we don't get our way or aren't the center of attention.

We can't just blame the young "Millennial" generation either. Where are our leaders? Our mentors? Parents? Teachers? Elected officials? Who's setting the pace? Leading the charge or helping folks re-calibrate? We can't put all of the blame on today's youth. We're in this together, so we all have to take responsibility. It's time for leaders to step up to bring balance, not push an agenda, over-react, take advantage, displace or defuse anger and responsibility.

Help people realize that we need adversity. We can take it.We can rise above it.

As we become more diverse, we will also need to work on being more resilient as well.