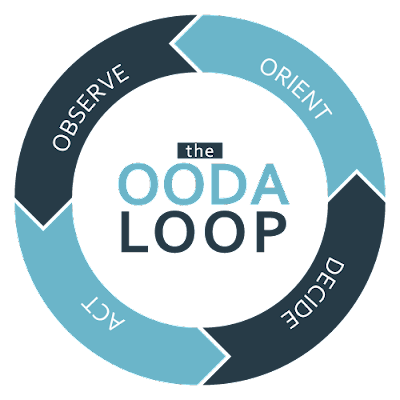 This post about Col. John Boyd's OODA Loop, comes to you from the infamous Wikipedia.
You can click the link if you want to read it from that source.

The OODA Loop is yet another process that is simple and something we do all of the time, however understanding the recipe with greater clarity can help us to utilize these skills with greater success, especially during times of stress and conflict.

Rather than reinventing the wheel and writing my own article about this now famous method, I decided to re-post Wikipedia's description of Boyd's OODA Loop. So, without further ado, here it is:


The phrase OODA loop refers to the decision cycle of observe, orient, decide, and act, developed by U.S. Air Force military strategist Colonel John Boyd.  Boyd applied the concept to the combat operations process, often at the strategic level in military operations. It is now also often applied to understand commercial operations and learning processes. The approach favors agility over raw power in dealing with human opponents in any endeavor.

The OODA loop has become an important concept in taking action in many area of life including: Litigation, business, law enforcement, military, personal defense and other decision based endeavors. According to Boyd, decision making occurs in a recurring cycle of observe-orient-decide-act. An entity (whether an individual or an organization) that can process this cycle quickly, observing and reacting to unfolding events more rapidly than an opponent can thereby "get inside" the opponent's decision cycle and gain the advantage. Frans Osinga argues that Boyd's own views on the OODA loop are much deeper, richer, and more comprehensive than the common interpretation of the "rapid OODA loop" idea.

Boyd developed the concept to explain how to direct one's energies to defeat an adversary and survive. Boyd emphasized that "the loop" is actually a set of interacting loops that are to be kept in continuous operation during combat. He also indicated that the phase of the battle has an important bearing on the ideal allocation of one's energies.
Boyd's diagram shows that all decisions are based on observations of the evolving situation tempered with implicit filtering of the problem being addressed. The observations are the raw information on which decisions and actions are based. The observed information must be processed to orient it for decision making. In notes from his talk "Organic Design for Command and Control", Boyd said,


The second O, orientation—as the repository of our genetic heritage, cultural tradition, and previous experiences—is the most important part of the O-O-D-A loop since it shapes the way we observe, the way we decide, the way we act.


As stated by Boyd and shown in the "Orient" box, there is much filtering of the information through our culture, genetics, ability to analyze and synthesize, and previous experience. Since the OODA Loop was designed to describe a single decision maker, the situation is usually much worse than shown, as most business and technical decisions have a team of people observing and orienting, each bringing their own cultural traditions, genetics, experience and other information. It is here that decisions often get stuck, which does not lead to winning, because:


In order to win, we should operate at a faster tempo or rhythm than our adversaries—or, better yet, get inside [the] adversary's Observation-Orientation-Decision-Action time cycle or loop ... Such activity will make us appear ambiguous (unpredictable) thereby generate confusion and disorder among our adversaries—since our adversaries will be unable to generate mental images or pictures that agree with the menacing, as well as faster transient rhythm or patterns, they are competing against.


The OODA loop, which focuses on strategic military requirements, was adapted for business and public sector operational continuity planning. Compare it to the Plan Do Check Act (PDCA) cycle or Shewhart cycle.

As one of Boyd's colleagues, Harry Hillaker, put it in "John Boyd, USAF Retired, Father of the F16":


The key is to obscure your intentions and make them unpredictable to your opponent while you simultaneously clarify his intentions. That is, operate at a faster tempo to generate rapidly changing conditions that inhibit your opponent from adapting or reacting to those changes and that suppress or destroy his awareness. Thus, a hodgepodge of confusion and disorder occur to cause him to over- or under-react to conditions or activities that appear to be uncertain, ambiguous, or incomprehensible.


The OODA Loop also serves to explain the nature of surprise and shaping operations in a way that unifies Gestalt psychology, cognitive science and game theory in a comprehensive theory of strategy. Utility theory (the basis of game theory) describes how decisions are made based on the perceived value of taking an action. The OODA Loop shows that prior to making a decision (the Decide phase), the person will first have to get information (Observe) and determine what it means to him and what he can do about it (Orient). In this way, the utility sought at the Decide phase can be altered by affecting the information the opponent receives and the cognitive model he applies when orienting upon it.[5]


... the proper mindset is to let go a little, to allow some of the chaos to become part of his mental system, and to use it to his advantage by simply creating more chaos and confusion for the opponent. He funnels the inevitable chaos of the battlefield in the direction of the enemy.


This simple yet powerful method can hopefully help you to be more effective at making and acting on decisions you make in many areas of your life.