Her Survival Guide, High Schoolers and a Hit & Run 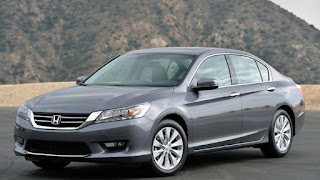 I've been driving Honda Civics for almost 20 years. My little black 2007 Civic almost has 200k miles on it. It has been a great car.  Very little has gone wrong with it; tires, a brake job and rear shocks are the only things I had to put in it other than regular oil changes and a tune up or two. It's my third Civic since I bought my first one in 2000. Awesome cars!

Anyway, so I drive out of state a fair amount, and although my car is good, it does have a fair amount of miles on it and I can see some repairs coming in the future, so I started to wrap my mind around buying another one. I figure I should start the process early; a dig your well before your thirsty kind of thing.

In 2016 Honda updated the Civic look to an eleven on the awesome scale. After looking at a couple, I was sure that was the way to go. And that's, as they say where the trouble started!

The 2016 Honda Civic got bad reviews from Consumer Reports(CR), so much so it was the first time it slipped off their suggested buying list. Why?! The reason they gave was mainly due to reliability, which is one of my largest concerns I have in vehicles and why I went with the Civic in the first place.

Now, I have to put things in perspective regarding what CR saying. After all it IS a Civic! So, I did more research and finally came to the conclusion that although I'm sure the car would probably work out fine, the key word  here is 'probably.' I just couldn't get over the reviews and didn't want to use my hard earned cash for a ride that would be less than I was hoping for. I mean, hey the last time I got a new car was almost nine years ago and I was hoping to get at least that out of my next one. You know the reason I wanted to buy a new one in the first place is so I know I will have a reliable vehicle if I ended up in some type of financial crunch (you know being self employed and all).

All that said, I started looking at 2014 or newer Honda Accords. A little bigger and the next model up, but they are rated high in every category CR has. The Accords are known for how bullet proof they are regarding reliability. Of course I didn't rule out 2014 or 2015 Civics either, but I was leaning over to the Accord side of the equation if I couldn't get a 2016 or 2017 Civic.

This year I had a couple good sized contracts come through, helping me with a down payment. I figured there was no time like the present to pull the trigger on something, before something derailed my plan.

My schedule has been wrecked lately due to a lot of training contracts, so time has been tight. When Memorial Day weekend rolls around, I go and test drive a half dozen cars or so and find a gray 2014 Certified Accord that really talks to me. The dealership is having a clearance (yea they probably tell everyone that!), so I get it for what I think is a good deal (as a matter of fact the price is lower than I paid for my 2007 Civic when I bought it!). I end up working out the details and am driving it by Wednesday!

Now this is a smooth ride, hands free blue tooth (I made this feature a necessity for any vehicle I was going to get), air (yep, I hadn't had air in my Civic for probably 5 years). I really enjoyed driving this new car! It handled great, was peppy, had a lot more cabin room, smoother ride, looked awesome! I hadn't felt this giddy over a vehicle since I was a teenager! 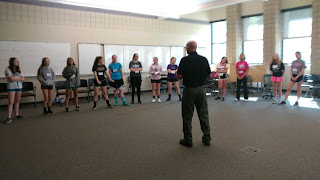 
Now of course, I have to pay for the car too, so that means work. So, I'm teaching a Her Survival Guide  for the 9th, 10th and 11th grade students at Caledonia High School and things are going well. Then, on my second day teaching, I'm walking out to my Cool New Car and I see something... What is that? Is it a reflection making my bumper look like that? Hmmmmm, I think as I get closer. As I approach the driver side the horror sets in. Some little m@#$% ker hit my new car! My car that I haven't even had for a full week has been smashed.

My adolescent inner self is screaming, "Oh My GOOOOOOOOOOOD! This isn't happening! Someone hit my new car!"

Yep, someone clipped the bumper and headlight. *SMACK!* And inside I was mad and wanted to kill the person who did it! 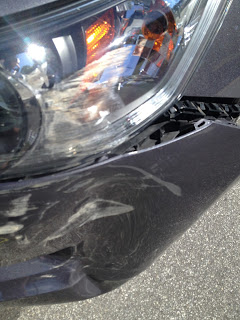 There was no one around, however there was a little yellow note with the persons name and number on it. "Well, at least he left a note." I thought as my adolescent inner-self wiped the tears out of his eyes and unferreled his fists. The note was the right thing for the driver to do, but that didn't stop my mind and emotions from wanting to rise. It was quite an effort to stay Baseline. Before I picked up my phone to call him, I had to regain my composure. I knew it was only an accident and getting mad and taking it out on the driver wasn't going to help anything.

I have written about what and why being Baseline is so important, but here's a review:

Remember, baseline is about being part of the solution, NOT the problem and in order to do this you have to be grounded. There are two kinds of grounding: Tactical Grounding or being grounded in the moment and Foundational Grounding or having healthy habits and living a grounded life.

Both are made up of three components:

Another component of base line is about what you are FOCUSing on:

The final the facet that I want to share about Baseline is breathing:

Before I called the number on that little yellow note, I took a deep breath (ok, a few of 'em) and instinctively went through each of items you just read and then called him. Sure enough, it was one of the students. His voice shook a bit as he talked. I asked him if anyone was hurt and what had happened. He told me the story and I commended him on his honesty and told him he did the right thing leaving his number.

After speaking with his mother we got all of the insurance arrangements taken care of. Both her and her son were very nice. Under the circumstances things could not have worked out any better. My car wasn't badly damaged, it was driveable, the damage was relatively minimal and most importantly no one was hurt.

Now, I have to admit it was difficult keeping my cool and not blowing up at the kid for hitting my new car, but by using some of the tools I described here I was able to keep things in perspective and not lose it. Later, the kids mother thanked me for not getting upset with her son. Both she and I thought he did a stand up job ethical thing by leaving a note and we both told him so.

I collected their insurance info and immediately started that process. (Hey, luckily they had insurance and were very amicable.)

So that part is taken care of, now I have been practicing my Baseline Skills dealing with the insurance company and body shop, but you'll have to wait to hear about that story on my next post!