Tips, Tricks & Tactics: The 'If / Then' Strategy 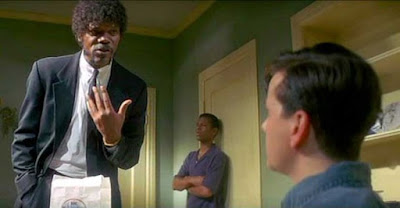 One of my favorite movies is Pulp Fiction. I love the scenes where Samuel Jackson's character, Jules and John Travolta's character, Vincent talk and especially when they 'negotiated.' They had a straight forward, no non-sense approach. Obviously their gangster style left little room for debate as did their pistols, however much can be learned if you know how and when to use those crazy gangsta tactics. Here is one of those tactics. It's as a simple, straight forward way to communicate boundaries. It's called the "If / Then" tactic. This tactic is one method you can use to communicate cause and effect  consequences and strong boundaries. It is a straight forward approach that should be used sparingly and only if you are ready and able to follow through with the 'then' consequence. Don't make idle promises that you can't or won't do what you say you're going to do. The 'If / Then' tactic sounds something like this:

This tactic can be used by itself or in conjunction with some of the other strategies like the OREO Cookie tactic described here.

Here is an example of the 'If / Then' Tactic:
Let's say that one of the people on your team continues to be late coming in from his break.You've talked to him about it numerous times, but he still does it. You've asked him if there was a reason he was late. You asked him to please be on time. You gave him reasons why he should be on time. You gave him choices. Heck, you even gave him a second chance (again), but he still comes in late. You decide that enough is enough and you're going to put up a strong boundary using the If / Then Tactic.

You: “Bruce, is there a reason that you’re late from your break again?”

Bruce: “Sorry, I lost track of the time.”

You: (Ignoring his B.S. excuse that he has said numerous times) “Listen Bruce, if you can be back at your work station on time, then I won’t have to bother you, you can have an easier day and get more work done. However, this is the third time we’ve talked about this, so if you’re late coming back one more time then I’m going to have to write you up… But I don’t want to do that man, so, if you could make it back to your work station on time I’d really appreciate it. Can I count on you?” (See, I threw in the verbal commitment tactic too!)

Now if Bruce is late again, you better write his ass up or he is going to continue to walk all over you and your paper tiger author-i-tay!

Remember this isn't typically a tactic that you start off with, it's one that you use after you've tried giving him a number of chances and/or even made some compromises or helped to figure out the problem in other ways if necessary. Also, make sure you can follow through with your "then!" If you can't, and he calls you on it, you will lose your credibility and negotiation leverage. Especially with people who you come in contact with on an on-going basis.

Well there you go all you Gansta's out there, have fun giving this one a try!