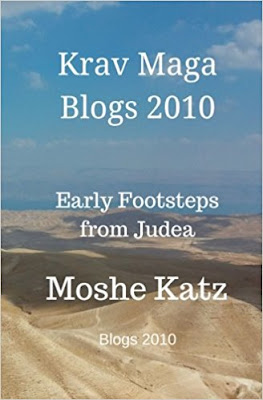 A couple of months ago I got a message from my friend Moshe Katz, founder of Israeli Krav International. He said he was putting out another book; an anthology of his blogs from 2010. It's called Early Footsteps From Judea: Krav Maga Blogs 2010. He asked me if he could include one of my old blogs, as well as write the introduction. I was honored to be asked to contribute and agreed to both of his requests.
.
Below is what I wrote for the introduction. If you're wondering about the rest of the book including which of my blog posts he used, well, you'll have to pick up a copy to find that out!

It was a crisp winter day in Northern Michigan, Moshe Katz was speaking to a group of concerned individuals who came to learn how to feel safer, more powerful in their world. People who wanted to have a better understanding of why there are those out there who seem to want to spread fear, hate, and violence upon anyone who doesn’t believe in the same way that they do. A reality that the citizens of Israel are all too accustom, a reality that the people of the United States are beginning to wake up to.

One person politely asked Moshe his opinion regarding whether or not the Middle East would ever be at peace. A question that has been asked by many others over the course of time, ranging not in weeks, months or years, but spanning decades, centuries and millennium. The answer that Moshe gave surprised me. Not only because of its simplicity and honesty. Not just because of its truth.  But, also because of my relationship with Moshe. I don’t think the Moshe Katz that I first met some ten years ago, would have given the same answer as the Moshe standing there before the crowd on that snowy day.

A decade ago, Moshe was just starting a new organization, Israeli Krav International (IKI). His mission began simply to teach people how to defend themselves as well as act as a goodwill ambassador for Israel and more specifically for Jews. His goal was to help people to defend themselves, and not live in fear. He did this by simplifying an approach that was accessible to everyone regardless of their limitations, age or athletic ability. and to share stories that inspired and taught. In his pursuit to accomplish this, Moshe travels the world sharing his vision and in doing so, he faces challenges to his own views and opens himself up to people and cultures with opposing beliefs that are sometimes much different from his own. Over this time I have seen him learn to embrace humanity with a more open heart and rather than fixate on our differences, focus more on that which connects us: Our humanity and our desire to protect. I’ve seen a change in Moshe that can only come from confronting one’s own way of thinking by exposing yourself to the world and its people. A change that is earned not given. A change that if embraced can leverage much greater things than merely teaching self-defense… No, not the same Moshe from ten years ago.

Moshe’s approach to Krav Maga, much like Judaism, is steeped in magnificent stories. Simple tales easily communicated to people from all walks of life. Stories that point to deeper truths. Stories that teach, protect and inspire. I remember reading his blog posts for the first time and wondering if the person who wrote them was anything like the words written on the screen in front of me. He shared his thoughts and insights very candidly, giving his unique perspective of the world he travels and of course, his Krav Maga.

Now you have the ability to read those very stories right here in this book, to enjoy and learn from. I believe his stories as well as his art comes from his sincere desire to share accessible tools to help everyone live a safer life. A life not necessarily free from fear, but rather one that has embraced fear and chooses to continue on in spite of it.

It has been exciting to not only witness, but also participate in the dynamic growth of IKI as well as Moshe, both as a teacher and as a person. What began as an outreach mainly to college campuses has developed into an international organization spanning well over 30 countries, hundreds of instructors and thousands of students worldwide. His dedication to the belief that everyone has the right to defend themselves comes through in the accessibility of what he teaches as well as his profound insights written on the pages you are about to read.

Before I sign off to let you enjoy the stories offered in this book, you may be wondering how did Moshe answer that question on that cold day in Michigan? This was his simple yet profound statement that not only applies to people in the Middle East, but people everywhere,

“Resolution between Muslim and Jewish people of Israel will not come from political or government intervention, rather the chance for peace will come one coffee at a time. Two people getting to know one another, sharing stories and seeing beyond their differences. One person at a time.”

And now I hope you enjoy sharing in the insightful stories that Moshe Katz has for you in this book!