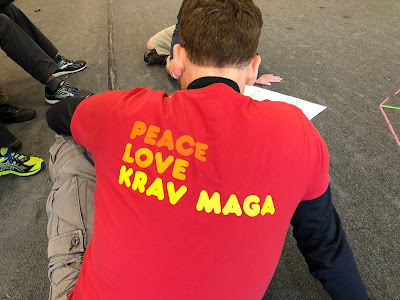 Jeff rocking out his new Krav shirt he got at last weekend's 2.25 Crash Course!

Yesterday, I almost took a pic of me in my shorts, flip flops and Bahamas Hard Rock Cafe' t-shirt.

Because it was sunny here and going up to 80!

...And although today is rainy, it's still warm!

As if things couldn't get better after this weekend's Krav Maga Assault Prevention & Response 'Crash Course'!

People came from all over to train here in GR w/us. Winnipeg, Canada, Texas, Upper State Michigan, and of course locally.

We had a pretty full house of folks who were looking to be introduced to or hone their skills as PeaceWalkers!

Not only did we work on ways of protecting ourselves physically, we also explored awareness skills, and some of the simple 'practical' psychology of how aggressors choose the environment and their targets when it comes to violence and crime.

We also looked at their method of engagement of how they carry out their assaults.

At least one of the folks there training was particularly inspired by these exercises... Possible too much so... but we won't mention any names... TIM! =)

Overall everyone seemed to have a great time learning, connecting and re-calibrating their PeaceWalker Skills and Identity!

Don't Worry... But You Better Hurry!

Don't worry if you missed the course...

We video recorded the entire seminar!

I'll be posting part 1 up on www.peacewalker.net later this week!

I'll post each of the other parts as we complete the editing and uploaded process to get them on the site!

In order to see it, you have to be a peacewalker.net member!

Because New Registration is Closing Next Week!
Beyond the 6 A's of Safety

Rather then just writing what these things are, you can click on each of the links to my Youtube channel to SEE a short video clip that talks about each strategy.

But this is just the beginning...

Yes, you should continue to explore, implement and understand each of these, but life saving principles. (How's that for dramatic!?)

...and keep learning things beyond these principles  that can help you avoid or respond to conflict and violence...

During this weekend's seminar one of our new PeaceWalkers hailing from Texas contributed a principle that distance equals time...

And we all know that the better we can control time the better chance we have at managing violence.

We think things like the (in)famous Reactionary Gap (which is between 21' to 29' depending on what research you are going from).

An officer with his pistol holstered (open carry, external holster. Retention service holster?? Not sure...)  is 21' away from a knife wielding attacker who begins running at full tilt toward the officer.

The officer attempts to draw his weapon and shoot the assailant rushing in.

The research shows that in this scenario you need approximately 21' (to 29' feet) to draw your weapon, fire and disable the threat.

Any closer and the officer typically gets stabbed with the knife.

So from that famous study the legend of the  reactionary gap began and still exists to this day.

However what if I told you that...
Sometimes CLOSER is Safer...

Yea, you read that right...

Sometimes being CLOSER to the threat can give you the advantage to control the engagement more effectively!

Well, there are many ways, but let me illustrate one...

Think of a straight jacket...

You know, the thing that people are put in so they don't hurt themselves or others when they are emotionally out of control and being violent.

Is a straight  jacket more effective if it is tight or loose?

If it is loose. it gives the person being restrained the chance (and momentum) to break free.

So, in this case closer is better.

Let's look at another example...

If you are interacting with someone where it may become violent and you either find yourself or have no choice but to be in close proximity, getting INSIDE the reactionary action/reaction gap may be a better strategy...

But only if you know how to place your arms, legs and body in the right spot to 'Check the Space' so when they move, you (a) have something in place to impede their action and (b) are in a position to 'smother' their efforts... In essence 'beating them to the punch' so to speak.

Keep in mind that this approach is only used in certain circumstances and I am not saying that closer is always better...

However in this example I may be forced to compress / collapse the space and in this case by positioning myself in a very particular way, So I could collapse the attackers space more quickly and effectively when they become aggressive, because of my close proximity. Even when reacting to his initial movement, I can still  'beat him to the punch' so to speak.

Tactical space is not just physical. It's emotional, psychological, verbal, social, (and MORE!).

Have you ever heard the old saying,

'Keep your friends closer and your enemies closer."

That can be interpreted a lot of ways, many of which are dubious and unhealthy...

However, let's just look at one way that will illustrate my point of closer sometimes being safer.

If my enemies are close to me I should have better intel as to what they are up to, which can help keep me safe, by knowing what their plans are, so I can prepare for them and not be taken off guard.

If I was more distant from my adversaries I wouldn't know what they are up to and may be taken by surprise, putting me in more jeopardy.

This is one way of staying safer by being closer.

If you want to understand how to better protect yourself and control the 'Tactical Space' of conflict then don't miss your chance to join us on PeaceWalker.net!

Along with all of the Courses, MasterClasses, Tips, Tricks & Tactics, you'll ALSO get access to the entire 5+ hours of training videos from our last Krav Maga Assault Prevention & Response 2.25 'Crash Course'!!

Here's a look at how the design on the NEW PeaceWalker Exclusive Pace Setter T-Shirts...

We're still making more than a few cool changes, but here's the direction it's going.

These shirts are ONLY going out to the 30 or so people who were first on board w/PeaceWalker.net (you know who you are!).

The rest of you can simmmer in your envy! =) (evil smirk)

We are creating some REALLY COOL SWAG for everyone to enjoy! 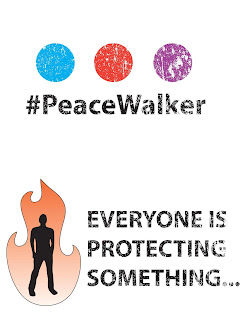 Have a great week and I'll see you soon!!