The Space to Live 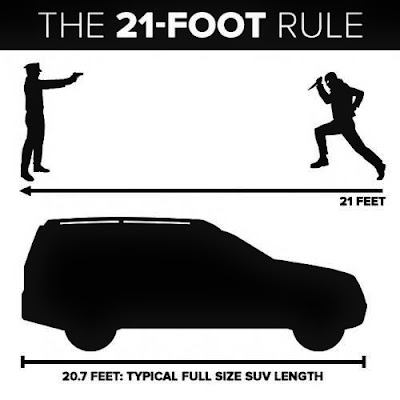 Just got back from New Jersey; a weekend of training (and a bit of teaching too). It was great hanging out w/old friends, meeting some new ones and getting some good training in.

As I unpacked my gear, I was reminded of a discussion that Jack Hoban's teacher Maasaki Hatsumi had regarding space.

He took out a piece of calligraphy parchment and painted the character of LIFE on one side of it, let it dry as he explained his thoughts of space, distance, timing and what we in the 'tactical' world would call the 'Reactionary Gap.'

When the paint was sufficiently dried, Hatsumi then flipped the parchment over and painted DEATH on the other side...

He then looked at us and said "In battle, the difference between Life & Death are often only the width of a paper apart!"

I thought it was an eloquent example

The Space to Live...

When fractions of seconds count... Distance often equates to time.

The way you move, the position you take, the distance you are at, all factor into the equation of your ability to take the advantage of a situation (even if only to survive it).

People often only think about the physical space, when it comes to reaction time. However there are many more spaces that greatly influence ones reaction time during an engagement.

Let me point out just two of these other 'Spaces':

If you are emotionally or psychologically overwhelmed, distracted, confused, disengaged or maybe just slow, it affects the time it takes you to respond. That lag may be the difference of being successful or not...

In minor situations it may cause you to lose that debate, the interview, a sale, negotiation or argument...

In extreme situations it can be the difference between surviving or not!

I don't have a lot of time to chat today, so I'm going to keep things short. I just wanted to open this up that when you think about 'Space', you consider more than only 'Physical' Space.

Building good habits to reduce your exposure to the 'reactionary gap' doesn't only revolve around physical training (but you should be doing that as well!).

Yes, spend time physically training, but don't neglect being emotionally and psychologically sharp (Foundational & Tactical Grounding), or even at the right 'distance' you can find yourself in the same vulnerable situation of not having enough time because you didn't have the 'Space' to respond to what was happening.

I know there's a lot there I could go into WAY more depth on...

Don't feel bad though, watch tactical shooting instructor Larry McDonald's MasterClass where we discuss & train it in the context of retaining and drawing your pistol:

If that's STILL not enough, don't fret, we'll talk about it more later!

Get more Tips & Tactics about Living a Protector's Life - Sign up for FREE Newsletter on www.peacewalkersubscribe.com