The Stories We Tell 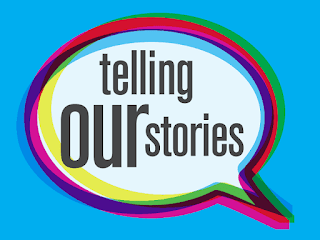 The other day I was reading yet another post of someone who was telling a story about their 'people'.
Before you think I'm some bigoted racist, let me explain what I mean when I say 'Their People?' When I say that, I mean any group that someone sees themselves as being a part of.

We have no shortage of groups to identify with, but that's NOT the problem. It's when we begin to disrespect others value as human beings outside of our group...or when we judge, devalue and disrespect someone's value as a human being because they belong to a group that we don't agree with or dislike.
Don't Get Me Wrong...

You DON'T have to agree, like or condone what the other group believes or does. You may even have / choose to confront a person in the other group to the point of violence (hopefully as a last resort). However, it has nothing to do with the VALUE of that person as a HUMAN BEING!

It may have to do with the values & behavior of the group and/or identity that those folks hang on to, but it's not because your Life Value is somehow worth more. That's not to say that someone may have Clearer Beliefs and BETTER BEHAVIOR... that's saying something entirely different...

You give yours to charity.

I buy some crack cocaine.

Most would agree that your money was more wisely spent.

However, no one would question the value of the $20...

Only HOW each of us spent it!

What we're talking about with separating someone's Life Value from their beliefs and behavior is the same. Why is This Such an Important Distinction?

#1 - If you start treating people as if you are a better human being than they are, do you think that will increase or decrease the amount of conflict and violence that will result in the moment & future between you?

#2 - What stories will you begin/continue to tell yourself (and others) to keep believing that you and your group are worth more (as human beings) than others?

#3 - How would you handle things differently by believing that someone's value as a human is valueless vs. of equal value as your own? How would the level of dignity and respect change your actions toward that person even if you became locked in a confrontation that may result in violence?
How Do You Train For THAT!?

Believe it or not, these ideas aren't about hugging the thug, believing that everyone is a good person or that all ideas and behavior are equal...

It's about being able to separate value from beliefs and behavior.

You may still end up in the same place, but it's how you get there.

That's why you have to train so that you have the proper:

CLARITY - So that you protect the right things. So you can consistently separate the Value from the Beliefs and Behavior.

COURAGE - It often takes courage to protect the right things. Especially when others don't clearly see the difference between Value, Belief & Behavior.

SKILL - Because human conflict has a broad spectrum. Protecting the Value of Life and working toward Most Good / Least Harm is often messy!