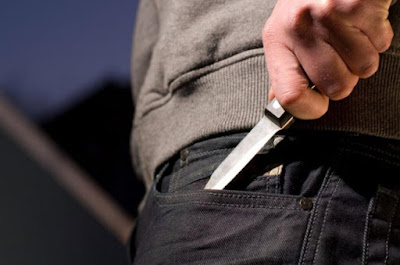 If you don't have a weapon in a potentially violent situation where there are weapons involved...

What does the Person w/the Weapon have?

Then we get into whether to...

Remember, weapons are dangerous (as if we could forget that!), so you should only choose to engage physically if that is your last resort for survival or to protect the life of someone else...

Do what you can to avoid the situation, get away, or talk your way out of it, if you can... Only physically engaging if that is the only option left to protect your own or someone else's life.

Here are some times when you MIGHT believe that going physical would be your best choice to protect your own life or the life of someone else's.


I'm sure you may be able to think of a few other scenarios, but these suggestions will get you going in the right direction...

If You DO Go Physical...

If you decide to go physical these THREE RULES will help to keep you alive...

CLEAR YOUR BODY FROM THE THREAT:

First move in a way to get your body (and the body of others you're trying to protect) out of danger from the weapon.

Control the weapon in such a way where it can't continue to pose a threat.
This can be done by controlling the 'space' around the weapon... A simple example would be to use distance to between you and the knife.

'Conquering' the threat doesn't me beating the snot out of the guy... But it might... It can also mean get the He** out of dodge... AKA run away.

Click Here to see me do a Physical Example of a Knife Threat Defense: