This Joke's on Them! 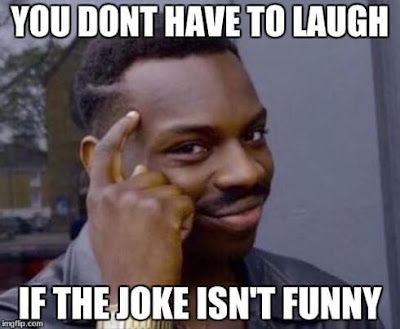 Ever Run Into a Complainer?

You know there are some people that will just complain about anything and everything.
I ran into one not that long ago. There was no making this guy happy. No matter what solution I presented, it wasn't good enough for him.
As a matter of fact, he was clueless that HE was the common denominator in all of his problems.
Of course he didn't see it that way.
He ran into the same situation over and over again (continually getting hurt in training.).
After hearing his complaints a few times, I discretely watched him as he trained.
I witnessed him saying things like,
"Come on you can go harder than that.."
Or
"...Is that all you got?!"
Or the crowd favorite...
"What if I did 'THIS'?" (followed by an inappropriate, out of context  quick, jerky attack (or movement), that his partner wasn't expecting, causing them to respond accordingly).
Or this guy would simply going to fast, hard and wild for his ability, limitations and age.
This would inevitably end up in a full blown sparring match that lacked the control necessary for safety or good training.
After telling him numerous times to relax, slow down, go easier, chill out and don't say things to egg your partner on. AND don't do the 'what if I do this' game out of context.
He just wasn't getting it!
Later, by the 'campfire' (at the end of class we sit in a circle for a quick Q&A, a tie in story and announcements), I told this tie in story:
Stop wasting your time complaining
People visit a wise man complaining about the same problems over and over again. One day, he decided to tell them a joke and they all roared with laughter.
After a few minutes, he told them the same joke and only a few of them smiled.
Then he told the same joke for a third time, but no one laughed or smiled anymore.
The wise man smiled and said: ‘You can’t laugh at the same joke over and over. So why are you always crying about the same problem?'”
It's YOU!
Hopefully he realizes that he is the source of his problem. I hope he can come around before he gets hurt or hurts someone else. Most likely he'll just get frustrated and leave w/o learning the real lesson.
You know the old saying...
"You can lead a horse to water..."
Anyway, if you want to learn a way of protecting yourself that is both effective and sustainable...
And (if you follow instructions) won't get you maimed in the process, then get on the Private PeaceWalker Membership Wait List.
https://peacewalker.net/about
In the meantime...
Have a great weekend and...
Keep going,
~Craig