This Shouldn't Surprise You 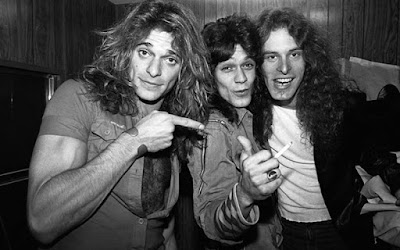 David Lee Roth, Eddie Van Halen and Ted Nugent sometime in the 70's or (very) early 80's
What does Rock & Roll have to do with being a better Protector?!

Stay with me because I have an cool story for you with a PeaceWalker lesson inside...

Before anyone knew who they were, an obscure rock band named Van Halen opened for Ted Nugent.
During Van Halen's sound check Ted couldn't believe his ears . . .
He was staring in amazement at this unknown kid named Eddie.
The sounds coming out of this kid's guitar!!
Nugent was out of his mind.
How was he doing it??
Guitarists everywhere are obsessed with creating just the right tone, and so Ted just HAD to know how the kid was pulling this off.
He was convinced that Eddie was using some sort of secret gear.
After a bit of arm twisting, Ted finally talked Eddie's guitar tech into letting him give Eddie's rig a test drive.
But when Ted started playing through Eddie's gear, a funny thing happened . . .
Ted Nugent still sounded exactly like Ted Nugent . . .
He fiddled with some of the amp settings.
He tried everything he could to replicate the awesomeness he'd just heard.
No dice.
Ted relearned what every successful musician knows:
The right gear and technique can make a difference, but ultimately your tone comes from your hands and your style, and what's in your heart.
Eddie Van Halen can play any guitar through any amp and still sound like Eddie Van Halen.
If you have never heard Eddie play, you need to.
(I can't even imagine that you haven't heard him before... at least in a recording. I remember seeing him live at the 1988 Monsters of Rock concert not long after David Lee Roth was ousted and Sammy Hagar joined Van Halen as their new front man. It was an amazing concert!)
Eddie is the absolute BEST of the BEST, shredding as only he can. He is forever remembered for his contribution to rock and roll!
There was none better.
And it's the same thing with you and your ability to protect yourself and others...
I don't care what style you're into... Krav Maga, BJJ, MMA, Karate or Kung Pow Chicken.
I don't care if you carry a pistol, knife, pepper spray or nothing at all.
Stop obsessing over the ONE TECHNIQUE to rule them all!
...Stop thinking that if you get more expensive gear that'll somehow increase your skillzzzz!
Stop chasing the next self defense, conflict management or tactical fad.
Don't think you need to be king (or queen) of the cage in order to protect yourself.
I'm telling you, it's not like that!
Don't get me wrong, I'm not saying that training in the right system or having the right equipment doesn't matter at all...
It does to some extent and you should be mindful when choosing what to train and getting good equipment...
But thinking if you only had a gun or the ONE TECHNIQUE to keep you safe or give you the confidence you're looking for... is like Ted Nugent thinking he could sound like Eddie Van Halen if he only had the "right" amp to plug into.
It doesn't work that way.
So, Relax.
Keep training.
Chill, but stay the path.
Keep going and...
Be your own amp so to speak.
Remember, YOU are the weapon!
As a friend and PeaceWalker Member Colby Taylor once said:
"I'm always armed, sometimes I carry a gun."
HOW?!
A good first step is...
Get my free Six Day Defense Program home study course BELOW:
https://sixdaydefense.com/
Keep going,
~Craig