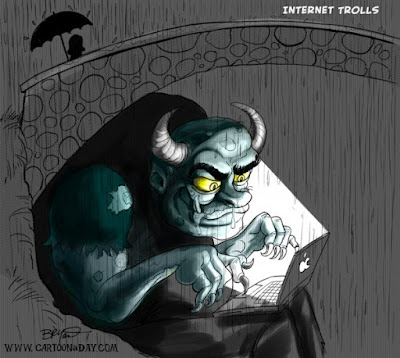 Visit From the Internet Troll!!

Oh, yes! It's been a while!
Yep, you got it, a Youtube Video Troller!
I have to admit, I do love these guys!
I only wish they'd be in one of my classes or seminars... But, that would mean they'd have to actually get out of their mom's basement and train!  =D =D =D
Here's what this one had to say about my 1 minute and 47 second video demoing a simple version of a foot sweep.=)
~~~~~~~~~~~~~~~~~~~~~~~~~~~~~~~~~~~~~~~~~~~~~~~
I don't normally like to be so negative, but you can't seriously think this would work? You block your attacker's punch, then he just stands there while you 1/ step in 2/ having pushed him back, grab him and pull him in 3/ sweep his leg? You would never have the time to do all that against a real attack. I know you have to break things down and go with the flow to demonstrate, but this is a big no-o. I bet you have something more practical you can show us.
~Fred B.
~~~~~~~~~~~~~~~~~~~~~~~~~~~~~~~~~~~~~~~~~~~~~
Well Fred, thanks for writing in...
Normally, if someone has a question in class or at a LIVE workshop, I simply (and respectfully) demo it on them... and help them see (and feel) the error in their ways! =)
However, when it comes to on-line trolling as such, here's what I do in 3 simple steps.
1) Delete comment
2) Ban them
3) Use their comment as an example and poke fun of it here! =)
No, silly man, I'm not going to debate or argue my point with you on youtube comment board. There's really no point.
I'd really rather not waste the time or effort in an on-line flame war of who's style is better or whose dad can beat up whom!  Or how I've used this move in sparring, competitions and out in the field.
I've been doing this a long... long... time and I am good with it! That said, don't feel the need to prove anything to you Fred.
I'd rather spend that time discussing and sharing things with YOU dear reader, my community member.
And if you want me to critique YOUR technique, I will certainly do that, but only if you are an academy student OR a Private PeaceWalker Member!
There's just not enough time in the day.
Otherwise you can bugger off little man! (said in my finest English accent!)
If Troll man Fred wants to get a real lesson, he'd have to actually be a member! And of course train!

You see, you have to have skin in the game...
Besides, it doesn't matter here for Mr. Fred anyway now...  None of that will happen here w/me, because I deleted him. Yep, banned for life! =)
That's what I do to all Trollers! Every-Last-One!
The most time I'll spend w/good ol' Fred is here mocking his laughable attempt to distract me from my mission and training.
He did amuse me though! So, thanks for that Fred! I appreciate the subject matter for my email and entertainment!
This Is Why...
I steer clear from most social media now a days.
Yes, yes, clearly I do engage with it a bit. Those videos I put up on youtube are probably 6 or 7 years old. Often times, I debate whether or not to take them all down.... But, good folks like yourself look at them too, so I leave'em up (for the time being).
Same thing w/flakebook!
That's why my main way of communicating w/you is here, via email. If you don't want to hear from me, or be a part of this community, just unsubscribe! No worries.
And If you want to actually LEARN, this simple system of personal defense and develpment, that's easy! Get on my Private PeaceWalker Membership where I share the entire system of protecting yourself and others from all kinds of threats! Including those annoyances like bullies, even one's disguised as SJW's or the Fred Troll's of the world. Both of whom are all too common today!
You see, learning to protect yourself is so much more than getting a gun, or learning some martial arts fighting.

There really is One Simple Defense that will help you. If you haven't trainied with me yet or been a part of my Private PeaceWalker Membership, than you probably wouldn't believe me if I told you how much of a Life Changer this approach is.
If you're like Fred here, than just hit the unsubscribe button...
However...
If you are curious what real defense looks like. What it really feels like to develop the confidence to wield power over your own life. Then you may want to check out my Private  PeaceWalker Membership.
No, it isn't going to be easy, but then either is living the life controlled by fear... Being told what to do. Doubting yourself and feeling frustrated and angry about it all the time. Feeling unsafe, or worse yet, feeling like you can't protect the ones you love.
If you like living small. If not having agency over yourself or your decisions is how you want to go about your day, then this isn't the community for you. I'd hit that unsubscribe button at the bottom of this page.
But, if you want to be a part of something bigger... Something that lifts you up and shows you a better way to deal with the challenges you face. Something that teaches you how to better defend yourself and your loved ones... Something that connects you with a large community of other like minded protectors, than you're in the right place!
Much to Fred's chagrin, learning how to protect yourself isn't about a front foot sweep... or any other one 'technique' really. It's a bit more profound than that!
If you want to learn the actual step by step method of being a PeaceWalker, than you'll want to get on my Private Membership where you'll gain access to the entire approach and MORE!
Simple, but not easy.
I share the entire formula inside the membership.
The first step is taking my free home study course. Here's the link:
https://sixdaydefense.com/
Keep going,
~Craig