Should You Escape Before Bad Turns Into Worse?! 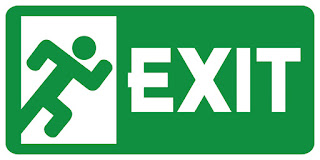 Today would have been a "Perfect" Day. The weather has been simply gorgeous: Crisp. Sunny. Cool, but not too cool. Warm, but not too warm.

The leaves are just starting to change, but falls in the air.

I had a great run!

...and then remember what happened in Las Vegas, and it brings me back...

Not in a bad way, but there is a heaviness that is undeniable...

And it gets me to thinking again...

About Real Things...
...about when things are less than perfect (to say the least)...

Should I Stay or Should I Go?!

My last email talked about ways to Avoid an act of terrorism and/or a "lone wolf" act of violence.

Today I want to discuss ESCAPING.

First of all, we need to talk about the 'IF.'

Yes, that's right, you read that correctly 'IF' I should try to immediately escape... Strange subject I know, but when you train w/me we tend to explore things from many angles...

NO, I'm not talking about martyrdom, vigilantism, trying to be 'a hero', or any of that.

I'm talking about starting with the WHY!

One of the times I was in Israel, I had a conversation with one of the Krav Maga instructors. He recounted a story about the difference between a person from Israel and the U.S.

The difference between an Israeli and everyone else is that people from Israel run toward the shooting.

(Regarding a terrorist attack) Rather than thinking, I'm glad I wasn't there. They think, I wish I was there to help. Maybe I could have stopped it, or helped in some way.

Please keep in mind I am not saying this is either true or the 'right way' to think. I am simply stating that there are a lot of different ways of thinking about this situation.

And how YOU think matters!

Yes, I believe that any 'normal' human being tries to avoid danger, violence and death.

But then I remember that these types of situations are extreme and ESCAPING is one of the strategies.

There have been many incidents where someone decided to stay and help others:

•            Prof. Liviu Librescu - 2007 Virginia Tech Shooting - This 76 year old (Holocaust Survivor & professor) held the door of his classroom shut while the gunman attempted to enter it. Although he was shot through the door, Librescu managed to prevent the gunman from entering the classroom until most of his students had escaped through the windows.

•            ...or this story from a couple weeks ago about Illinois P.E. teacher Angela McQueen who grabbed the 'lone wolf' shooter’s arm and subdued him after he opened fire in Mattoon High School’s cafeteria. *Read more: http://therightscoop.com/meet-the-hero-high-school-teacher-who-stopped-a-gunman-from-massacring-students/#ixzz4uGr5nFFM

I don't know the full details of what happened in this weeks Las Vegas Mass shooting, however I know that even amidst the chaos and casualties, there are numerous accounts of people helping others.

PLEASE READ THIS BELOW...

This blog post IS NOT advocating staying and/or confronting the assailant(s) and being a hero, rather it is about approaching the situation as clearly as we can and ASSESSING what we believe to be the best strategy for the circumstance.

We will address each strategy to see which might be best suited for the situation we face: Avoid - Escape - Ambush - Attack