Should You Run, Hide or Fight?! 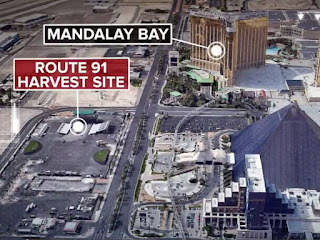 Why? Because, I'm NOT at one of my usual coffee houses.

If you know me at all you know that I'm not a Starbucks kinda guy. But, I'm here trying to use my
time wisely in between appointments.

I must admit though... I don't know if I can make it through this cup of joe... It's just not 'my cup of
coffee.' (Da dat da psssh). Sorry couldn't resist!

I'm here in flip flops trying to hold on to the last remaining warmer days before fall really takes a
hold of us!

...and then I heard the news about the mass shooting in Las Vegas...

...and now I'm back to thinking about some 'heaver' things...
Some Thoughts On Active Shooter/Terrorism Preparedness
If you trained at all w/me you'd know that I don't subscribe to living in paranoia and no I'm not a 'preper.'

I believe in being aware, empowered and skilled.

There is no sense in living a life that is filled with fear, suspicion and hate.

Training to be a PeaceWalker is about having a Good Life!

Then I get the news of the latest mass shooting event in Las Vegas and I feel the heaviness of the situation...

I'll be honest, in the shadow of this event in Vegas, I am now struggling w/this marketing campaign that I started well before it happened.

As a matter of fact, the seminar was scheduled last year. I've been running ads for several weeks.

I wrote this bulk of content for this email (and the two to follow) before the Vegas shooting event occurred.

The irony isn't lost on me, however I know there are no shortage of "Ambulance Chasers" out there in my position...

My view of being caught up in an act of terrorism or active shooting event is like winning the lotto in reverse! Meaning if you won the lotto that's a good thing, if you somehow got caught in an active shooting or terrorism event it would be equally unlikely... only bad.

I sometimes play the lotto, but I don't plan my retirement on it.

I train (and teach) how to deal w/situations like this, but I don't plan my life around the event.

I LIVE, prepare ad be aware the best I can and if s#it happens...

I deal w/things the best I can.

Which brings us to...

When it comes to Terrorist and Active Shooter Situations, the US Homeland Security has put out a simple message to civilians on how to respond: Run, Hide, Fight.

I'm not going to argue with them on the point, however I would like to propose a slightly different way of looking at things.

I like to think of things a little different... I would rather think of it this way:

Although we will be went over these strategies in much greater depth in October's Krav Maga 2.25 Active Shooter / Terrorism Defense Workshop (Available SOON on the PeaceWalker Life Membership Site), I thought I'd share some of the basics of each strategies beginning w/Avoidance.

Avoid the situation if possible. Meaning that you stay aware of people, situations and things that are going on around you, you might not only avoid a bad situation in the moment; if the red flags are spotted soon enough, the entire ordeal could possibly be avoided altogether!

FBI statistics state that all of the active shooting and terrorist events in the U.S. showed warning signs BEFORE the event occurred. The person said something or did something that could have potentially tipped someone off to their intent BEFORE it occurred.

According to the Israel Ministries of Foreign Affairs, Israel has hundreds of attempted terrorist attacks per month, many being dealt with by civilians.

...Many being detected BEFORE something bad or worse happened.

Now, I'm not blaming anyone for missing the warning signs of the attacks that were successful, I'm just saying that the more vigilant we are, the more red flags we see and act on (appropriately).

Here are a few things to watch for:

The Eight Signs of Terrorism:

Now, I know some of the above terms might be a bit lean on explanation, so if you want a more expanded definition follow the link below.

According to a recent article published in The Spectator, where journalist David Patrikarakos interviewed an Israeli counter-terrorism agent; quoting him saying:

‘If, for example, you see your neighbour going out at 3am every night or see him or her buying a lot of knives, or carrying a suspicious backpack. Look at Anders Breivik,’ the counterterrorism official concludes, ‘all the red flags were there before and no one did anything. People need the courage to speak up. Every tip can lead the authorities to something much bigger.’

As stated in Gavin DeBecker's book, "The Gift of Fear" simply states, listen to your gut. If it feels wrong it probably is. So act on it. In this case tell someone... Report suspicious behavior, situation, or 'thing' to the authorities.

A buddy of mine (Chad) would always say,

Yea, I know it's a little different from what De Becker is saying, but my point is we often are (just) oblivious to what's happening around us and when we DO notice something we sometimes doubt ourselves. Well we're saying ...Don't!

Oh, speaking of cats, one more list of Red Flags, this one is for Active Shooters, otherwise known as "Lone Wolf Shooters" (Nope, no connection w/my nick name Mike G.=)

Identifying the red flags and potential active shooter signs within your midst could save your life, and the lives of your coworkers or (fellow) students.

I'll fill you in a little on the other strategies (Escape, Ambush & Attack) in later emails...


Don't worry, I'll only cover one at a time.