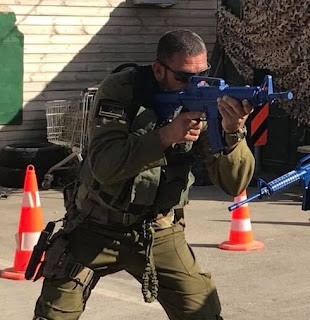 I had to have a little patience today. Coffee shop was busy and I couldn't find a seat. Everyone must be out on this beautiful, brisk morning!

Oh the troubles I have...

And then my mind wanders back to Israel and the real world outside of this warm, cozy place I frequent so often.

I catch myself reflecting on a discussion while training in Israel at Caliber 3.

The discussion was about...
.
Training, Tactics & Beliefs

During one of the training sessions at Caliber 3 the instructors (Etan, Boaz and Col. Sharon Gat) were talking about what makes a soldier good? What makes him really effective?

Now you may not be a solider, however, you can replace the word 'soldier' with leader, protector, manager, parent, employee, officer, teacher, etc. etc.

Anyway, back to the question: "What really makes a soldier good?"

Answering the question, someone replied, "Good tactics, are what makes a solider effective."

The Col. replied, "Yes, good tactics are important, but how is a soldier able to perform good tactics?"

Another person yelled out, "Training. It's good training that makes an effective soldier."

Immediately someone else shouts out, "Mindset. It all starts with a good combat mindset."

"Now we're getting somewhere," Etan says with a serious look on his face.

"Don't our enemies have a mindset? And train? Don't they have tactics? Don't they understand how to shoot, and make bombs?"

So Then, What's the REAL Difference!?

...What Separates Us Is Our BELIEFS!

Then he clarified what the Spirit of the IDF is built around:
Human Dignity: The IDF and its soldiers are obligated to preserve human dignity. All human beings are of inherent value regardless of race, creed, nationality, gender, status or role.

Now don't get me wrong, I don't agree with every policy, political or military decision that Israel does, no more than I agree with everything that the United States does, even though we built this country on the Constitution and Bill of Rights based on Life, Liberty and the premise that 'all men (people) are created equal.

So, What Does That Mean For YOU?!?

But, how can we bring this concept home, so we can use it in our everyday lives, personally and at work?


First, here are a couple things:


Basically, how does what you do show dignity to Life? How does it Respect and Protect Life?

As a matter of fact, this plays a HUGE roll in how the IDF Counter Terrorism Units teach Target Acquisition... (We'll discuss that on another (Almost) Daily e-mail!)

Let's get back on track to Belief and Ethics...

Here's How to Find Success In All You Do...

If you can strive for Most Good / Least Harm in everything that you do...

If you can identify how whatever you do relates to Respecting and Protecting Life, you'll be on the track to greater success in everything you do, whether it is sales, teaching, law enforcement, management, business, parenting, etc.etc.

We go into a great amount of detail what this PeaceWalker strategy actually looks and sounds like in Your Life. The PeaceWalker Site will show you Case Studies, MasterClasses, tips, tricks & Tactics on how  others are Successful ACTUALLY DOING IT!