There's No Shortage of Violence 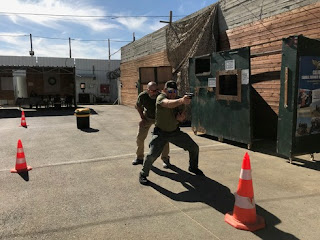 There is no shortage of violence in the world...


I've been in Israel for over two weeks now and there have been several incidents of violence in the US. The first major event was the Texas Church Shooting on Nov. 5th and then another incident in California less than two weeks later.


Yesterday I was here in Israel driving to Caliber 3, a counter terrorism & security facility to train for the day. When we got there one of the instructors was late due to a traffic delay.


Because there was a terrorist attack near our location which caused the traffic to be backed up.


Our main instructor Etan Cohen who is still active in an elite counter terrorism unit of the IDF already received the report of what occurred.


Apparently a terrorist coming from one of the Arab villages took his car and tried to run over numerous people, when his car was disabled, he got out of his vehicle with a knife and attempted to continue attacking people. He was shot by a soldier and is currently in critical condition in the hospital.


The two people who were struck by his vehicle are alive and recovering from minor to moderate injuries.


Israel and the US look very differently at violence. We have different approaches on how we view it, prepare for it, identify it, handle it and recover from it.


I think we have a lot to learn yet in the U.S.


It seems that in the U.S. we have this idea that if we can control people by creating more policies, passing more laws, or somehow teach that everyone should "just get along" than we can create a society that is devoid of all violence.


Maybe if we were smarter, more informed, or understood one another better, maybe that'd do the trick?  Or how about if we took away all of the things that might be used to hurt and kill other people, then everything would be ok? Right?


I'm not saying that we shouldn't continue to work toward helping people to be educated, informed, open and respectful toward others. We should teach value for human life. We should continue to strive to create peaceful people and communities.


But is that enough?!


What happens when you do these things and someone (or a group of someones) will not act in kind?


What if you have a conflict of some sort? From a disagreement to violence? Injured feelings to physical fights? What about rape or murder?


Yes, of course there have to be guidelines, rules, policies, laws. But, it seems that we are pushing hard to force the impossible.


What is the 'Impossible' I'm referring to?

Have the right attitude about life. Be aware of the risks. Identify warning signs. Have a plan. Have skills to communicate fair, firm boundaries, and be able to protect yourself if they are not respected.


Teach others to do this as well. Teach them formally, teach them informally, but most of all teach them through YOUR OWN EXAMPLE of how YOU live!


...Or we can keep trying to force everyone to comply with more and more regulations, policies and laws...


That seems to be working really well so far...


So What Happens When There's Conflict!?


There is just so much you can do to inspire, teach or force someone to do something...


Even if it's the right thing.


Take kids for example. You may try to teach a kid to the right thing, however they have a will of their own and will sometimes defy your best advice because of their own freewill.


Then they have to be prepared for the consequences as well.


I know the subject of conflict and violence is a big one and one that can get very complicated. Too much to tackle in this (Almost) Daily email, but I just wanted to touch on it.


I think it boils down to having the right Attitude about life. Be Aware of the things going on around you, especially for trouble. Be skillful in laying down appropriate Boundaries and have a Plan 'B' if it turns into a shit show. Slang for being able Act to protect yourself.