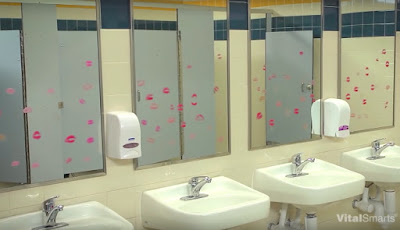 You've heard me talk about controlling the engagement right?!

It's easy to get the idea when I say 'Train your body like a soldier'...

Basically, stay in shape. Do it appropriately for you, your age, limitations and season in life, but stay active so you're 'battle ready' so to speak.

However, when I say train your mind like a general most people nod their heads, but I don't think many really get what I mean...

And to make matters more confusing, I say that these strategies can be used in many arenas...

Well, here's a quick story about a janitor who trains his mind like a general and controlled the engagement to outwit some students who were continually making a mess of the ladies bathroom...

A local middle school in Michigan was recently faced with a unique problem. A new fad arose among the 8th grade girls with the use of lipstick.

They began bringing, sharing, and trading with their friends to try out all the new styles and shades. The gathering point for this activity was one certain bathroom at the school.

That was fine, but after they tried out all of these lipsticks, they would press their lips to the mirror, leaving dozens of lip prints every day.

Every night the custodian had to clean them off, but the next day the girls would put more lip prints on the mirror.

He asked the girls several times to stop making a mess of the mirror...

But they ignored his requests and continued leaving the mirror a mess every day.

Finally, the janitor had an idea...

To drive the point home, the custodian then demonstrated to the girls what a pain it was for him to clean the mirrors. He took out a long-handled squeegee, dipped it in the toilet, and cleaned the mirrors off thoroughly.

The reaction was almost always the same. The girls stood there in shock, glared at each other and squealed, and then hurried back to their classes in disgust.

Since then, there have been no more lip prints on the mirrors.

There are teachers, and then there are educators!

Fight a Battle vs. Win the War

The janitor could have continued to fight each of the girls on the merits of not making a mess of the bathroom...

But rather than fighting to win an individual battle, he used his mind like a General to control the tactical space of the situation to win the war so to speak!

Learn more about  developing a Protector's Lifestyle by Subscribing to my FREE Newsletter: www.peacewalkersubscribe.com