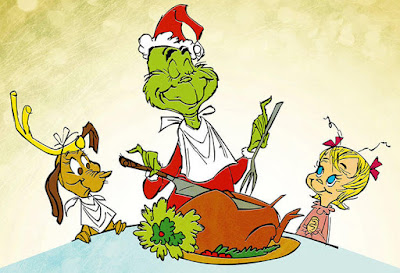 So, I was getting some last minute gift wrapping and merriment done when I heard a knock at my door...

I Know It's Christmas Eve...

... and you probably want to get the rest of your wrapping and stuff done so you can get to bed at a decent time, but I HAVE to tell you about this crazy little guy who showed up at my door.

He was short, about 4 feet tall.

He also had weird shoes that curled at the toe.

And even more weird, he had pointy ears.

I asked him who he was and he said he was a messenger from Santa!

Apparently, Santa is getting older and slower, and he's a bit concerned about his safety when he delivers those pieces of coal to those folks on the naughty list tonight!

He is worried about being able to handle himself if he is confronted by some of these folks who may be a bit worked up, emotional... even violent!

He wants to make sure he has the tools to deal with the type of conflicts that he's likely to run up against tonight!

Santa knows how this time of year can be really stressful for people!

He said he wanted to know how to have the confidence and skill to be able to deescalate a situation AND know what to do if things get 'carried away'.

Good Ole Santa wanted to know how to handle 'Mr. Naughty List' (Jacked up on a bit too much eggnog and brownies)!

So the big guy in red wanted my advice.

Can you believe that?

So here's what I told this messenger to tell Santa:

When it comes to trying to deal with conflict in a social setting, here are 7 guidelines to surviving those moments that the holidays often bring:

(1) Work toward Most Good / Least Harm For Everyone. (You can call it 'Christmas Cheer or Holiday Spirit' ...Goodwill toward mankind... Whatever...)

(2) Know that you can’t change peoples behavior only yours. (It's their own actions that put them on the naughty list...)

(4) Teach People how to treat you & act in your presence.

(5) Set clear Boundaries w/yourself & others.
(6) Know your deal breaker in every circumstance! (When it's time to shut up or just leave!)

(7) Have a Simple Plan if your boundaries are not respected. (Exit Strategy)

There's a reason we only see some of these folks once a year!

...But you still don't want to make a scene or get on your mom's bad side by going all 'Krav Maga' on your brother-in-law or cousin because he wants to keep talking politics or bringing up that time you streaked naked down the street when you were 8 years old! =)

Anyway, so that's that.

This is the plan I have for Santa.

He said he's looking forward to joining the Private PeaceWalker Membership when it opens up again to new members in early 2020!

(You can get on the waiting list here: https://peacewalker.net/about)

I told him good luck tonight and I'll keep him in the loop about the membership.

I'm wishing you and those you love a GREAT holiday season...

Festivus for the Rest of Us!!

Thanks for being part of my journey in 2019 and here's to an even more exciting and prosperous 2020!

I'll talk to you soon!