Tell Your Boss 'NO' w/o Getting Fired! 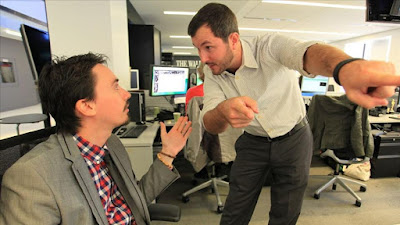 Being a PeaceWalker and walking your path of being a Protector doesn't begin and end w/physical threats...

Oh no! It includes that, but there is so much more...

Knowing how to draw boundaries and deal with conflict at all levels are important skills to have. Skills you will use every day of your Life!

HERE'S AN EXAMPLE from my Corporate America days...

Years ago, the company I work for hired a new sales manager who was busting everyone's balls with meetings, projections and reports. To the tune of 15 to 20 hours per week (wasted) between conference rooms and on the computer...

My normally 50+ hour weeks, quickly turned into 70+. I started coming in on the weekend to catch up, so I wasn't so buried during the week.

Finally, after a few months of this, everyone on the sales force was ready to blow a gasket, so rather than continue complaining and bellyaching, I decided to talk to the owner of the company about it.

I was able to say NO to the extra work, not get fired, reduce my workweek back down to being reasonable and get my Life back!

With situations such as these, where you are trying to create a situation that is amicable for everyone, you have to be able to communicate in a way that is diplomatic, firm. yet holds benefit for all parties.

I didn't want to quit, but knew if things didn't change I'd be looking around more seriously.

SECOND RULE: Don't force or threaten, rather give options and 'If/Then' scenarios... And have your 'Plan B' ready!

THIRD RULE: Clearly Communicate. (In this Case) a Win/Win scenario.

When you can, you want to 'Set the Stage' in your favor...

In this situation I first set it up by asking the owner what he thought a 'reasonable' work week was.

(Make sure to get good intel... Being that I worked there for a number of years, I  KNEW what he'd say)

I reflected back that I thought that was reasonable too, both for sales performance and overall Life balance.

I then asked him if he realized that the sales team on average were now spending 10 to 15 hours per week in meetings and another 5 to 10 hours per week on all these new documentation and reports that were required of us.

I communicated that I understood some meetings, reports and projections were necessary, but things have gotten out of hand. But wouldn't it be more productive spending that time out in the field getting new clients, servicing current clients or gaining back old customers?

That opened up the next part of my strategy...

'So, what would you like me to de-prioritize in my work schedule in order to fit in these extra meetings and reports?

(At that time I was the top sales person of the firm... and had been for several years.)

Although he knew the trade off I was referring to, I said it anyway, so that we were both on the same page...

"Do you want more Sales or more Meetings?"

He choose Sales and although it didn't happen overnight, the entire sales force got their Lives back by a reduction in mandatory meetings and reports.

Life was good again for a while...

Can you take this method of communicating boundaries, adapt it to use in your own Life and circumstance?

If not, you may want to check out the PeaceWalker Conflict Communication Program available as part of the Private PeaceWalker Membership. It'll be opening up to new members again in the next few weeks!

More than Just Kicking A$$

Remember, being a Protector and Living the Life of a PeaceWalker takes more than just carrying your pistol, training martial arts or wearing a uniform...

The REAL bad 'mofo's' are the one's who are confident dealing with conflict at all levels!

And that my friends all begins with...

(I've only said it a thousand times before)

Having the right Mindset!

Want tips, tricks and tactics about having that right mindset as a protector?! Subscribe to my [Almost] Daily email and get my FREE 'Street Smart' Guide to Self Defense! www.peacewalkersubscribe.com