Learn the Real Secret to a Villain's Advantage 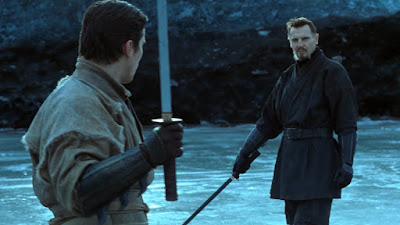 As you can see, I'm on a Villain kick again!

What is it this time?

Well, the last email when I wrote about them, I listed a number of attributes that gave them the advantage...

Well, I was watching one of my favorite movies a few nights ago and it reminded me of something else that those villains do that will give you the advantage too if you know how to harness it!

(If it's any consolation, this scene does remind me a lot of Star Wars.)

Do you remember Ra's al Ghul played by Liam Neeson?

Well, Bruce Wayne (Batman) ends up training under him to learn his Villainous ways of understanding strategy, tactics, influence and mindset. (It wasn't until later that Bruce figures out that good ol'e Raz is actually a Super Villain...)

Regardless, under al Ghul's tutelage, Bruce learns much from him and later, ends up putting those skills to use fighting for good rather than evil.

During an iconic training sequence, Bruce and al Ghul are sword fighting on a frozen lake. All the while this is happening, al Ghul is talking...

'You must become more than just a man in the mind of your opponent.'

"If you make yourself more than just a man, if you devote yourself to an ideal and if they can't stop you, then you become something else entirely..."

Al Ghu moves on past such philosophical lessons to a much deeper, personal one. The death of Bruce's parents.

Their training goes on for a while and Bruce is doing pretty well. He's holding his own against his teacher at first.

Unrelentingly, Al Ghul continues to prod and pick at him.

He know's Bruce's true weakness, anger and fear... The trigger is with his parents... With his father.

So al Ghul twists that knife to draw blood...

'Your parents death wasn't your fault... It was his father's.'

This drives Wayne to angrily lash out in a controlled fit of rage...

Al Ghul know's he's pushed him beyond his emotional edge. In a quick succession of powerful moves, Bruce manages to do a reversal, knocking al Ghul on his back...

Bruce, believing he has won, holds his sword to al Guhl's throat, demanding his teacher to yield...

To which al Ghul replies,

'You haven't beaten me... You've sacrificed sure footing for a killing stroke...'

Then he taps the blade of his sword on the ice near Bruce's leg, causing the frozen surface beneath Wayne's feet to collapse, plunging him into the freezing water.

The next scene show's both Wayne and Ra's sitting around a fire where he finishes the lesson on fear, anger, love, loss, and mindset.

There are so many lessons there that we simply don't have the time to get into all of them...

Ra's was teaching Wayne the secret recipe, the blueprint behind the techniques.
He forced him to think more strategically.

It's this villainous strategic thinking that Batman continued to use to battle the forces of darkness.

Don't forget that much like any warped leader, it was al Guhl's twisted ethic, that effected his strategy, which kept him from succeeding in the end.

However, don't throw the baby out with the bathwater!

Those lessons that he taught Bruce about mindset, strategy and tactics would serve Batman well countless times in the future.

The Formula for Flexibility

It's this same understanding of strategy and tactics, mindset and influence, that will trump technique every time.

...and this is all driven by your ethic as a protector.

An unclear, unbalanced ethic will eventually warp your objectives, strategies and tactics.

If you know the formula behind things, you will be able to improvise, adapt and overcome much more quickly & effectively.

This is why it's important to learn more than just techniques.

This is why simply learning some tricks from youtube without someone helping you to learn the principles and context, behind them typically only gives people minimal success.

You and I both know that an exercise isn't typically like real life.

Training is important, but real life is more fluid and wily than your training! It only takes a very small nuance to render your technique ineffective! So, you have to be able to quickly adapt!

It gives you a greater advantage if you are working from solid tactics and strategies, rather than just trying to keep up with techniques alone!

This is why my approach when teaching people how to protect and defend themselves isn't just about teaching a bunch of techniques.

That's what makes this approach so unique. It doesn't necessarily make it popular, but it does make it effective.

Is Time Running Out For You!?

If you want to begin learning this formula of how to be a protector of yourself and others. It all begins with the proper mindset.

If you want to get Tips, Tricks & Tactics on the protector mindset and building a PeaceWalker Lifestyle click this link: www.peacewalkersubscribe.com

Don't wait to learn how to get the advantage!