How to Disagree w/o Arguing or Backing Down 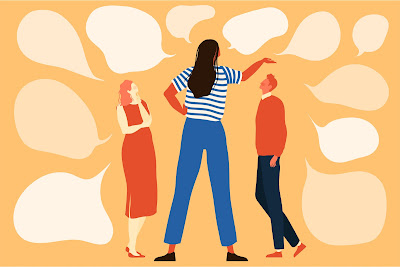 A PeaceWalker member reached out to me the other day, telling me how they used what they'd been learning.
Here's the story...
As you know currently with this pandemic and social unrest, there has been an even larger slice of conflict out there to contend with. One or our fellow members was telling me how they got into a discussion that turned into an argument with someone over wearing face masks.
I guess it started out pretty mild, but quickly escalated into a bit of a tiff. Our dear member said that they kept baseline and presented their point about their perspective on the topic at hand.
But...
The other person wasn't having it, and they started firing back statics and their side of the story. Apparently, when they weren't able to convince them to see things their way, they began becoming more aggressive.
The more they talked, the more agitated they became, until, getting red in the face, they were almost screaming about all of the idiots who didn't agree with them.
At that time, our budding PeaceWalker, kept his baseline and decided to cut things short and simply leave.
Which was a...
Good Move!
But, they asked me what they could've said?
After commending them for keeping a cool head and just leaving. I reinforced that he did a great job simply picking his battles.
Some people don't want to discuss things, they're just looking for others to validate their own views... and if the other person doesn't echo what they think and say, it can get ugly.
You know, if you're not careful, it can end up in a soapbox swinging, slug fest of conjecture so to speak.
HERE'S SOMETHING YOU CAN SAY WHEN YOU WANT TO DISAGREE w/o ARGUING or BACKING DOWN>>>>>>>>>>>>
First of all, you need to stay cool, be baseline. One of the response could have been,
"I hear what you're saying. I just don't agree with you."
Say it respectfully, calmly and then shut up, don't say anything. Bask in the blessed silence for a moment, as you decide how you want to proceed.
Are both of you wanting to get into a discussion about said topic?
If so, do you think it is going to be an interaction you want to engage in?
If it is, what are your deal breakers (boundaries) to ensure it's a good interaction?
Another option...
You could simply figure that it's not worth your time and effort. You could choose to pick up your toys and go home.
It's your choice.
If they become 'offended'... Well, that's on them. Let'em own it and not put that on you. If they try, don't let'em!
Don't let them pull you into an argument either! You said your piece...
It they call you some choice names, let them roll off your back and keep on truckin'.
Not worth it if you ask me!
But... you gotta do you... Just remember you can just walk away!
Now, on the off chance that they get physical, that's a different story!  I'm not gong to get into in this blog, but it IS something you should know. It's a game changer. I cover in great depth in the Assault Prevention & Response Module of the PeaceWalker Program.
You need the complete approach when it comes to handling conflict. Things can change quick!
Not to mention, when we interact with folks, (especially under stress and conflict), things are emotional, verbal AND physical, so you better know how it all comes together!
If you're already a Private PeaceWalker Member, then you'll find the answer you're looking for in the Basic Training Module.
HOWEVER...
If you're not a member, sorry, but it's not open to new members yet. It'll be re-opening in a few weeks or so... BUT only for a short time.
Check out what's in the membership & join my Journey and subscribe to my [Almost] Daily email.
Go to:
https://peacewalker.net

Don't miss your chance!
In the meantime...
Keep going,
~Craig