Mask Up For Conflict! 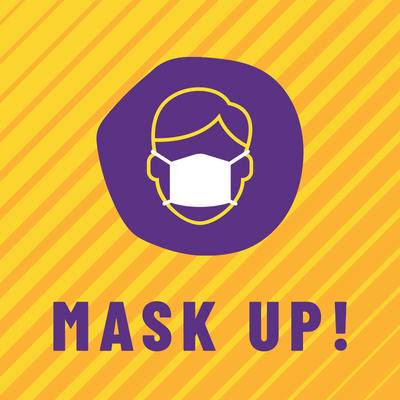 Saturday one of my new academy members, Bob pulled me aside to tell me a story about putting his newly found PeaceWalker skills to work at his local gym.
Even though Bob has only been training a couple weeks, he embraced our idea of what it means to be a PeaceWalker. He was telling me that he had his headphones on while he worked out, so he didn't notice the situation before it erupted.
Basically, the gym requires people to wear a mask while they are on premises. A hard charger came in to workout and didn't want to wear a mask. The young gal working there asked him to put one on. Upon hearing this, the guy blew a gasket and started yelling and making a scene.
Bob, told me he noticed that this guy was really starting to yell and get in this young gals face. Bob said that he was hoping that the guy would calm down or just leave. Neither of which happened.
So, Bob made one more lap and told himself that if this guy was still yelling at the gal, he'd have to do something. Someone had to step up to help this young lady out before this escalated into something worse, like a physical assault.
Bob went on to say that the little training that he already received about being a PeaceWalker helped him to better handle the situation.
He approached the man cautiously, but confidently, like he recently learned from his training. He was very aware of his 'tactical space,' which helped him to know where and how to safely stand, when he walked up to this guy.
Bob said that because of his new PeaceWalker perspective, he felt more confident to communicate with this guy.
He started by connecting with the young guy; empathizing and relating to him. He tried to calm him down a bit, hopefully deterring the young man from doing something he'd regret.
Even with the little bit of training he had, Bob was able to talk this guy down enough to leave the building. This action protected everyone in that situation: The young attendant, Bob, everyone in the gym INCLUDING the hard charger himself.
Hadn't Bob stepped in, that situation could have easily gotten out of hand resulting in someone getting hurt, or worse. Not to mention potential police involvement.
Regardless of your view on wearing a mask, situations like these are happening more and more. This is the forth incident I've heard of this week. And that's just from people that I know.
The likelihood of you getting caught up in something like this, keeps increasing as long as this pandemic continues.

Dig Your Well Before Your Thirsty...
What?!
Meaning, just like Bob, start getting training before something happens.
If you end up in a situation before you get training, it's too late. It'd be better if you develop your tools before you actually need them!
It's really about...
Lifestyle Choices...
Remember, learning how to protect yourself and your family isn't about checking a box...
.
It's about creating a LIFESTYLE!
.
...Living a Protector Lifestyle starts with you!
.
Not to worry though...
.
It's all in my PeaceWalker Private Membership. You'll be introduced to the formula you'll need to develop the skills to not only defend yourself, but stand up for other people too.
.
And not just physical tools, but learn how to communicate more effectively during conflict. How to influence. How to lead. How to Live more deliberately. More Powerfully!
.
Get on the wait list now. It's opening soon!
.
Here’s the link:
.
https://peacewalker.net/about
.
Keep going,
~Craig