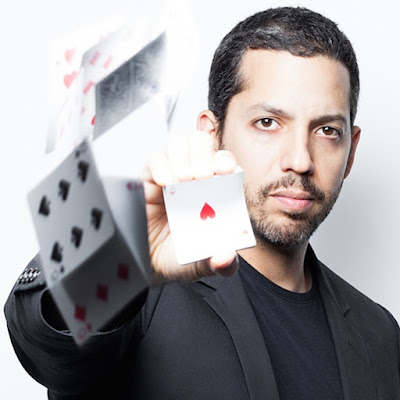 Yesterday I was telling you I listened to a podcast where Tim Ferriss interviewed famous magician David Blaine.

I found the interview rather interesting... but I'm pretty biased. I've had a lifetime fascination with magic. I've seen many magicians over the years, from amateurs' to the pros. Heck, one weekend a couple summers ago  I even dragged my gal down to the American Museum of Magic in Marshall, MI.
If you haven't been there, you should go. It's a cool little town. The museum isn't that large, but it has an amazing amount of magic artifacts.
The walls are wallpapered with old vintage playbills and poster of all of the old greats: Houdini, Blackstone,  Doug Henning, Howard Thurston and others. Heck they even have a large cache of books owned by the infamous Alister Crowley.
Some really cool exhibits. If you time it right, you can even catch a show there!
David Copperfield called this museum one of his 'favorite places on earth.'
So, What's the Lesson?!
So if you don't know David Blaine, he's one of the best magicians out there today. He's been on top for quite a while now. He does close up street magic and all of these endurance performance stunts, like being buried alive for 7 days, being frozen in block of ice, standing on a 100' pole for a day and a half, and many more stunts!
He's quite an interesting cat...
Obviously, he's a professional performer, world class for sure!
BTW - Ironically, Blaine's interview was called Fear{LESS}! No Way! You know that  have a program called Fearless in Five Days, so  the name alone drew me to give it a listen!
During Blaine's interview, they allowed people to ask questions. One guy asked David how he should practice for an upcoming magic performance in 90 days. The caller went on to be more specific, asking, "What Skills should I focus on to maximize my training in such a small time frame?"
David's answer was a very important one that doesn't just apply to magic performances. If you and I embrace what David suggests, it will help us to learn anything new.
Here's David's response on how he trains to get good at something new:
[Paraphrased]
I like to commit to something by putting myself in the hot seat by (publicly) announcing what I'm going to do, even if I'm not quite ready to do it yet. Once committed to it I follow through and do everything I can to accomplish that goal that I'm not ready for.  I'm all in!
Find a few things, work on them, learn them. it's going to be very messy at first... keep working on them until you figure out how to do them on friends and family., Try it, try it, over and over, and then go out and try it on and try it (again) over and over and over a few hundred times you might start to become 'OK' at it.
Did You Catch That?
He mentioned two parts to really:
#1 - Make the commitment
#2 - Announce it to others (some pressure & accountability to follow through!)
#3 - Work through the mess w/practice practice practice
Those are lessons you and I both need to continually hear, especially right now in this season of goals, New Years Resolutions and the like!
Did You Make a Commitment!?
Training to get into 'fighting shape' is a little different for us everyday protectors and a LOT different when you are in or around your 40's (or beyond!).
So, in a few weeks I'll be doing a special LIVE Stream Zoom Training Session, where I'll be sharing the Secret to Training Over 40.
However, It really doesn't matter if you are 40 or not, this short on-line workshop webinar will help you to get the most out of your training as you start your 2022 training.
I'll share some of the things I've learned in my 40+ years of training, teaching and real world experiences.
Some of the things I'll be sharing in my 4010x Workshop:
1) Injury Prevention and Recovery
2) 40+ Peak Performance In and Out of the Academy
3) How to Get the Unfair Advantage
Yes, you'll need to register for it, but there's no cost to attend.
More details coming soon!
In the meantime if you haven't checked out my Krav Maga Swag & Apparel lately, here's the link to some pretty cool sh*t!
https://ronin-krav-maga-swag.creator-spring.com/?
Now I'm off for some well deserved sushi!
Keep going,
~Craig