The Freedom From Want 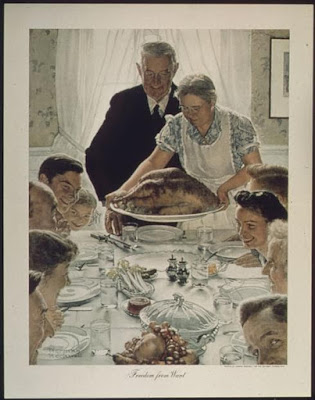 Speaking of, I hope you and yours had a very nice holiday!?
I sure did!
It turned out to be a distinct contrast from last year's, which was non-existent for my side of the family.
This year's Thanksgiving was what I'd call a "Norman Rockwell's" Holiday...
It was perfect, picturesque.
I couldn't really ask for anything more... Wow!
I hope yours was the same!
Norman Rockwell's Secret...
Well, to be honest, it wasn't really a secret, it was at one time quite public. Now it's simply not known to most.
The Rockwell picture at the top of this email called "Freedom From Want."
The painting shows an aproned matriarch presenting a roasted turkey to a family of several generations, in Rockwell's idealistic presentation of family values.
is the third in a series of four oil paintings entitled Four Freedoms. They were inspired by Franklin D. Roosevelt's State of the Union Address, known by the same name (Four Freedoms).
The address was delivered to the 77th United States Congress on January 6, 1941.
In the early 1940s, Roosevelt's Four Freedoms themes were by the government to help boost patriotism. This theme was eventually incorporated into the Atlantic Charter, and became part of the charter of the United Nations.
The series of paintings ran in The Saturday Evening Post accompanied by essays from noted writers on four consecutive weeks: Freedom of Speech (February 20), Freedom of Worship (February 27), Freedom from Want (March 6), and Freedom from Fear (March 13).
Eventually, the series was widely distributed in poster form and became instrumental in the U.S. Government War Bond Drive.
Things Have Changed...
It's profound how much things have changed since those days.
Arguably both positive and negative changes have transpired over the years. I'd say much more good than bad...but as most things. it would depend on who you talk to.
The 'good ole' days' weren't quite as good as we remember'em. We tend to forget the ugly details in lieu of the good memories.
Regardless of your perspective I think that we need to continue to make this country a better place for everyone to live. Things are changing and fast! But let's not throw out the good with the bad!
I still like oldies like Charlie Brown Christmas and the Grinch even though the times they came out of weren't perfect.
I still say Merry Christmas even though I'm not religious.
I like that my Jewish friends wish me a Happy Hanukkah, my Muslim friends wish me a Eid al-Fitr and my Buddhist wish me a good Bodhi Day (a holiday which falls on December 8th and celebrates the day in which Siddhartha Gautama sat underneath the Bodhi tree and attained enlightenment.)
Even though I don't follow any of their traditions I appreciate them wishing me goodwill in their own traditional way. I don't take offense or feel as if they need to believe the same way that I do.
Bugger Off...
Hey, if someone is extending me well wishes, I'll take'em, no matter the tradition or language. It's much better than them telling me to bugger off or trying to kick me in the pants!
It's the PeaceWalker Way...
Being strong enough to be gracious to others, even (and especially) those who don't see the world the same way you do, is what being a PeaceWalker is all about.
It's a good practice doing this with folks who are wishing you well in their own way.
Believe it or not, expanding yourself to accept them and their praises w/o trying to change or judge them will help you keep your baseline when you have to deal with people who don't treat you nicely and/or even if they mean you harm.
This goodwill to all mankind is tricky isn't it?
It means everyone, even those who oppose you.
You have to be good, and I'm not just talking on Santa's good list kind of good. I mean you have to know how to handle yourself during the stress of conflict and violence good.
So...
If you'd like to learn more about this path. The Power of Protection, The Art of Influence and the Confidence of Clarity...
Then get on the waiting list now. The membership opens to new members this week!
...And there is a huge bonus in store for the first few folks who sign up!
Click here now!
https://peacewalker.net/about
Keep going,
~Craig