The Original Nightmare Before Christmas 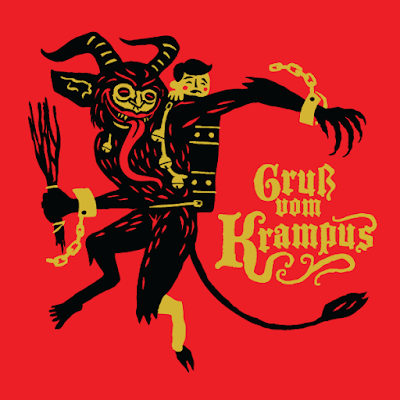 The Nightmare Before Xmas?!?

.Let’s talk about Krampus, the original nightmare before Christmas!
.
Krampus is the evil version of Santa Claus.
.
He is a half goat/half demon looking thing in chains, with a long pointed tongue and razor sharp fangs. Instead of bringing good kids presents, his job is to punish naughty children with everything from swatting them with birch branches to drowning, eating, and dragging them down to the pit of hell.
.
The Krampus legend originated in the Germanic regions of the Alps as a tale to encourage children to behave. According to Christian lore, Krampus was conquered by St. Nicholas, he demanded their obedience (apparently there was more than one!?) making them part of his legion.
.
Whatever they are, trust me when we tell you, only the mind of Stephen King or Clive Barker could conjure creatures more nightmarish.
.
Anyway, ‘ol Krampy also visits PeaceWalkers too!
.
And, he (figuratively) dispenses the same punishment on the naughty ones.
.
What kind of naughty PeaceWalkers?
.
Well, for example, folks that:
.
* Don’t work toward Most Good / Least Harm for everyone.
* Who aren't keeping up on their training.
* Protectors who are protecting the wrong things, like money, their ego's or misguided agendas.
* Folks who procrastinate starting their protector journey altogether.
* Excuses! Krampus LOVES punishing folks w/excuses!
* People who think and act like victims. (It's the fiery pits for you...)
* Spend all their time & money learning stuff that just won't work in the real world
* Even those who are working on really effective tactics, but not rounding out their training to include ethics, verbal negotiation, a force continuum, or protecting others. (It's a big ol' piece of coal for you too!)
* Or those who never bother learning from the old school guys who've been there / done that when it comes to training and application.
* Armchair know-it-all's who get all of their training from youtube. Are big on opinion and trolling, but short on actual experience.
* PeaceWalker's who don’t invest the first hour of each day into their own Mission and success.
* Mindlessly chase training "hacks" instead of learning & mastering the fundamentals.
The list drags on and on through the cold wintery woods…
Anyway, Krampus is Out There Right Now! Skimming the shadows. Seeking those PeaceWalkers to punish.
So, if you’re engaging in any of the naughty activities above, then God help you.
Because nobody else will…
But, there is a way to keep Krampus at bay.  (if it’s not too late already!)
If you're already a Private PeaceWalker Member, breathe easy, you're safe!
HOWEVER...
If you're not yet, you only have until TOMORROW, to rectify your evil neglectful ways...
Get on my free home study course NOW or succumb to the fate Krampus has for your!
Here's the link:

https://sixdaydefense.com/
It may save you and it always puts the fear of God into ol' Krampy should he come stalking you.
But hurry, you're running out of time! Krampus is checking his naughty list and you would be wise not to be on it!
Keep going,
~Craig