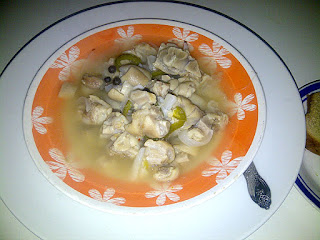 By this time, I see that my plan wasn't going quite as I... well, planned. After checking in on the boat, I head to the local convenience store to buy some provisions before getting back on the boat later that afternoon. I forget it's Sunday, so the place is closed, however Othello (I assume the owner) lets me in anyway and lets me grab what I need. Nice guy.

I notice that all the stores here have thick iron bars on all of the doors and windows. The gas station is equipped with bulletproof glass... Hmmm... Although that isn't really any different than many of the places not too far from my place at home, none the less, it makes me more aware that I look like a tourist, complete w/backpack. At least I'm not toting around a bunch of luggage!

I tip Othello for letting me in his store when it was closed (he didn't have to do that!). Feeling the pings of hunger, I realized I haven't had anything to eat all day. So, I ask Othello where there was a good place to eat around here? He directs me to a local place called Charlie's Stadium Cafe'. It's literally around the corner. They call it the stadium cafe' because it is built in the front part of an old sports stadium. Anyway, Othello says it's a favorite local place. 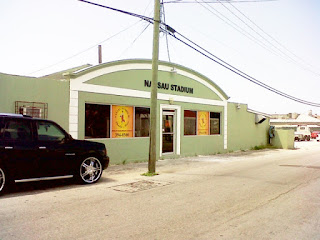 I walk in. It's empty. There are a couple gals working there who greet me. They say something and then grin and laugh. I can't understand them very well because I haven't quite picked up their accent yet. They repeat what they said, directing me to a booth. I sit.

Yet again, they address me in that sweet island dialect. No menus. They just apparently are asking me what I want to eat. I'm looking for some local cuisine. I think I understand them. She is saying something sauce or soup. Local? Yep. Local. Ok, I smile and nod. A few minutes later out comes a huge bowl of soup... Pigs Feet with Sauce.

Oh... NOW I understand what she was saying! Yuck! Boiled pigs feet in soup... Lucky for me it comes with bread.

Yes, I was looking for something local, but this was a bit too local for my taste. Well, at least it came with some bread!

Not wanting to be rude, I was committed to giving it a try.

I quickly realized that I didn't even know how to eat pigs feet! Do I pop them in my mouth and eat them whole! They looked like a mass of hooves, with bone, grizzle and fat. I didn't see any meat on them what so ever.

I look down at the heaping pile and think, "of all the times for there to be huge a portion..." Well, here it goes. I shovel a spoonful in my mouth. It tasted like salty soup. As long as I didn't think about what I was eating it was alright. I munched the hooves around in my mouth, biting off all of the stuff that I could swallow with out choking. Then, after I bit off as much of the chewable tissue I could, I gingerly spit out the remaining hoof into my hand and put it next to the bowl. I continued this process until I went through half of the bowl. My stomach only turned twice threatening to eject my efforts back onto the table. I held strong...

The waitress, Rachael came back to ask me  how everything was? I said great (of course). I finished the "sauce" off by dipping my bread into it. The soup portion was pretty good, but after eating about half of the pigs feet, I was done.

When I was settling my bill, I got a chance to talk with my waitress. I told her that it was my first time eating pigs feet and I admitted to not even knowing how to go about it. She told me that I was doing alright. With the sweetest smile, she went on to tell me how their restaurant is known for their pigs feet in sauce.

Where ever I go people are proud of their heritage, their food, accomplishment, beliefs and values.

I smiled, thanked her and left a tip on my way out.