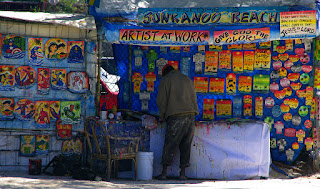 
Hilton, my cabby takes me through the winding back streets of Nassau. Immediately I notice something odd. I never realized that they drive on the left side of the road here. Who would've thunk?!

Along the way I ask Hilton if the surfing is good in the Bahamas.

"No, not good. Beautiful reefs, but water too shallow, mon." He says in that cool laid back island accent.

Good to know, so I guess I won't be learning how to surf here. That would explain why I never see any huge Bahama surf spots in the magazines. Ok, I'll have to stick to swimming, snorkeling, kayaking and swinging off the Tarzan swing rigged to one of the masts.

After a half hour or so of the twisting and turning we finally pull up to the the El Greco. Much like on-line dating, the picture that they post on hotels.com looks much different than what I saw before me. The 1988 prom pic gave way to 2017.


I grab my things, pay Hilton and check in.

"You pay $20." The clerk tells me as he pushes a poorly xeroxed sheet of crinkled paper with hand written notes scrawled on it.

"There must be a mistake." I say pointing at my printout from hotels.com that clearly states at the top of the sheet, and I quote, "YOU'RE ALL SET. PAID IN FULL."

"Well, it says PAID IN FULL right there. How am I misreading that?" I say, staying calm, but feel that twinge of anger rising from my belly.

"No, international doesn't include VAT."

"I've use hotels.com internationally and they haven't charged me VAT when it said "paid in full."  I state matter-of-factly.

"Get your manager." I say firmly.


The manager comes out and give me the same line. Quick on his feet, he says that it is in the fine print and points out that I only have the first of three sheets printed out. I raise my voice firmly telling him that this is crap. He's not budging. He's really leaning on me not having my full docs to prove it wasn't in the fine print. Which I must admit I didn't read, I've just never been charged above what hotels.com charged me; here, there, in or out of the States.

Now, I would like to say that I used my Sinatra like influence to make him see things my way, but it didn't go down that way. We stood there eyeball to eyeball. A standoff. I'd been on the road since 4am and it was now 5pm. I was tired and didn't want to start off my vacation like this. Either this guy was right, or it wasn't his first rodeo and I was just another tourist who'd be taken advantage of. He knew that most of the hotels were booked solid and I didn't want to be out trying to find another place now after traveling all day. So, I reached in my pocket, pulled out $20 and cut my losses.


*Note to self, print entire document so next time I have the 'fine print' with me as well.

He grunts and pushes my room key across the counter to me. (Yup, an actual key, not key card!). I follow him back through the atrium where he showed me my room. It wasn't a hole, but for $149/night (including my recent $20 'VAT'  charges), it more resembled a Motel 6 than how it was depicted in hotels.com. No bugs, but not what I was expecting for the cost. However, it was right across the street from the beach.

Would I stay there again? Sure, it wasn't that bad. After I get back home and settle in, I'll look into the hotels.com 'fine print' to see if there was a shred of truth in the VAT story, or if it was total BS.

After the manager leaves, I toss my gear onto the bed, change into shorts and flip flops and head out. I meander down the beech a fair ways, then head back toward the hotel to find somewhere to eat. I find a place by the hotel and order some food and a beer.  I'm not there more than a few sips into my beer when this dude with a huge 70's style afro approaches me smiling all friendly. He looks like William Marshall from the 1972 movie Blackula, complete with long pointed nails and bloodshot eyes (thankfully, minus the fangs).  Replace the tux with baggy jeans and a slightly soiled red tank top and you can see who I was looking at.

"Welcome mon, I'm the promoter, Mr. Booty." He says with a Cheshire grin.


"No mon, Mr. Bodhi, not booty, but I can get you booty, or jib (putting his fingers to his lips mimicking smoking a joint.) Whatever you want mon, whatever."

I chuckle, "No thanks man, I'm not into either, I'm just here to have dinner and a couple drinks."

"Really mon, whatever you need, I'm your guy. It's my job to make sure you and your guys havin' good time." He says smiling from ear to ear.

"I see that." I say still laughing at how cliche' this all seems.

I go back to eating before Mr. Bodhi-Booty (my new nickname for him) leaves to see to his other guests.

Before he takes off he asks, "How long you here for?"

"Only tonight." I reply between bites.

Now I get a feeling, 'that' feeling, you know? It might not be the best time to be 100% honest about traveling alone.

"Some friends are meeting me here after they get their luggage." I say straight faced.

"No worries mon, I make a good night for all you guys."

He seemed to buy my line, as he walks away. Why wouldn't he? My delivery was good and most people don't travel alone, so my claim is totally believable.

Remember kids, honesty is a relative value and although lying is usually viewed as bad, under certain circumstance (such as this) it is encouraged. Please pay attention!

I finish my over priced meal and walk back to my overpriced hotel. I wouldn't have paid half as much in G.R., however GR isn't 90 degrees, sunny and on the beach. Not to mention I wouldn't have the Mr. Bodhi-Booty or El Greco stories either.

By this time, I'm tired and it's getting late (well, late enough anyway), so I retire for the evening.

The best part of all of this is... We're just getting started, I'm not even to the boat yet! It's going to be a good week, I can feel it!